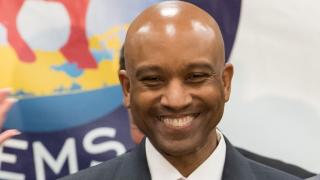 A count of nearly 17,000 absentee and affidavit ballots in the Suffolk County sheriff’s race is about 40 percent complete, with Democrat Errol Toulon Jr. maintaining a lead over Republican Larry Zacarese, according to county election officials.

The paper ballot count has been completed in Shelter Island, Smithtown and Babylon and is nearly complete in Brookhaven, Katz said.

Toulon had an unofficial 1,354-vote lead on election night.

Republicans cast 6,168 absentee ballots, Democrats accounted for 5,330 and 1,072 came from members of the Conservative and Independence parties, which backed Toulon. There are 2,400 absentee ballots from voters not aligned with any party, and the remainder came from smaller parties.

Affidavit ballots are given to voters when their names are not found on the rolls at their polling sites.

LaLota said the count will be suspended Thursday and Friday for Thanksgiving and will resume Monday with officials counting ballots cast in the final 28 election districts in Brookhaven. The count then will move to ballots cast in Islip, Southampton, Riverhead, Southold, Huntington and East Hampton.

LaLota and Katz each said final results may not be known for two weeks.