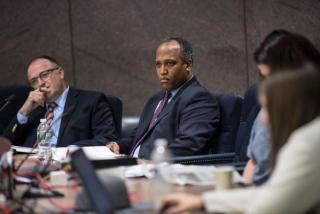 Gregory was voted in on an 11-5 party line vote, with Republican lawmakers nominating Legis. Kevin McCaffrey, GOP caucus leader, as a symbolic alternative.

Despite his candidacy, McCaffrey complimented Gregory on being evenhanded with the minority Republicans.

Legis. Steve Stern (D-Dix Hills) and Tom Muratore (R-Ronkonkoma) were not present, but had excused absences.

Gregory said after the vote that he plans to name an ad hoc budget committee in the next few weeks to concentrate on cutting the county’s structural deficit, more closely scrutinize spending by county contractors and tackle fiscal matters lawmakers did not have time to deal with in last fall’s budget process.

“By the time we get our report back from the Office of Budget Review, we have less than two weeks to make decisions on how to change the budget,” Gregory said.

He said he hopes the committee will review the performance of contract agencies, county borrowing policies and ways to enhance revenue so lawmakers can put forward midyear budget amendments, permitted quarterly under county law.

Gregory also said the committee could probe whether there is a way for the county to reduce spending on legal ads in local newspapers — now totaling $500,000 a year — without hurting public access to key information about notices for public meetings, details of proposed county laws and land liens for unpaid property taxes.

Several legislative critics say legal ads largely are a waste of money since the public can access most information online. Others counter that some people do not have access to computers and there continues to be a need to publish legal ads.

Gregory also said he expects a committee dealing with Suffolk County Community College finances to have a report before the end of the month on a proposal to give school officials more certainty over future long-term funding for the two-year college.