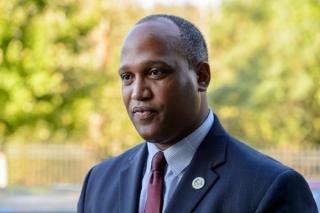 Gregory (D-Copiague) said in an interview this week that the county could get $47 million alone by auctioning off a county-owned 163-acre Cold War-era missile site in Westhampton, part of which is now used as a county impound yard.

The county could also save $29 million in fraud and inefficiencies by using “predictive analytics” to find anomalies in data, he said. Reviewing leases and consolidating office space could save the county an additional $8 million a year.

Suffolk faces a $163 million structural budget deficit through 2018 despite raising more than $80 million in fees over the past two years and operating with 1,000 fewer employees than in 2012.

The Democrat-controlled Legislature has recently bucked proposals by County Executive Steve Bellone, also a Democrat, to double a $55 traffic ticket fee and stop a July 1 pay increase for appointed employees and attorneys.

Gregory said he wanted to present budget savings ideas now, instead of waiting until Bellone sends a $2.9 billion budget to the Legislature in September.

“I’m glad my Democratic colleagues are listening to Republican calls to redesign county government,” he said.

Gregory also wants to review the use of county cars and cellphones.

In addition, he said he will press state lawmakers next year to give the county authority to go after businesses that don’t collect sales tax, and to expand collection of sales tax from online retailers. He said the county could gain $13 million a year from the measures.

Aside from the Westhampton property, Gregory said the county could raise $30 million by selling other county-owned properties identified in a 2009 county-commissioned study.