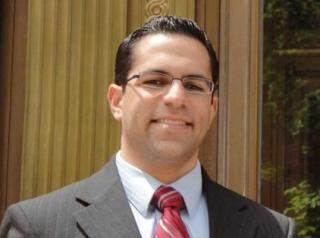 With Republican incumbents facing potentially divisive September primaries, Smithtown Democrats launched a bid last week to regain a seat on the town board.

The board hasn't had a Democrat in four years, but party leaders expressed optimism on May 20 at their nominating convention in Hauppauge. About 40 committee members unanimously endorsed supervisor hopeful Steven Snair and council candidates Adam Halpern and Richard Macellaro.

Snair, 31, a little-known Nesconset attorney making his first run for public office, said he believes his party has a legitimate chance to win. "Our opponents would be foolish to underestimate any one of us," he said. "We think that there are a lot of people out there, regardless of party, who feel that they are not being represented by town government."

But Democrats face an uphill challenge in a town where Republicans outnumber them: about 31,000 versus 21,000. No Democrat has been supervisor since Vecchio, a former Democrat, switched parties in 1990. Since then, the GOP has dominated the board.

Republican town chairman Bill Ellis predicted the GOP primary winner, whether Vecchio or Creighton, will win November's general election. Vecchio, in his 36th year as supervisor, won the party's endorsement last week by the equivalent of one committee member's vote.

"I don't think the Democrats have a chance to win regardless of who wins the primary," Ellis said. "You can take that to the bank."

Other Republican primaries are expected in the town council race -- where incumbents Thomas McCarthy and Kevin Malloy face opposition from county Legis. Lynne Nowick (R-St. James), who is leaving her post due to term limits -- and in a potential three-way race for the GOP nomination for Nowick's seat.

Macellaro, 60, of Kings Park, said Democrats have "an opportunity . . . to be heard this time because of the conflicts that are within the current town government structure."

But Democrats do not have a candidate to challenge embattled GOP Highway Superintendent Glenn Jorgensen or a contender for Nowick's seat. Party leaders say they are seeking candidates for those posts.

Town Clerk Vincent Puleo, a Conservative running with GOP endorsement, is not expected to face a primary. His Democratic opponent, Edward Haeffer, a Realtor and former Golden Gloves boxer, said he would upgrade the town website, which he said uses a "yesterday type of technology."

"There should be a change at Smithtown Town Hall, because you can't have one-party rule," Haeffer said. "You have to have those checks and balances."