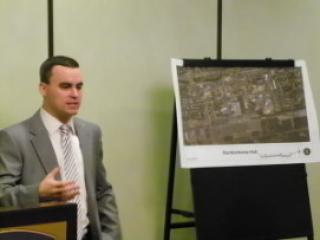 Hours after Republican County Legislator Ed Romaine announced that he is seeking his party's nomination to fill the Brookhaven Supervisor seat left open by Mark Lesko's resignation, Newsday reported that Democrats voted on a nominee of their own: Lesko's chief of staff and a former county legislator himself, Brian Beedenbender.

The unanimous vote reportedly took place at Brookhaven Democratic Committee headquarters in East Setauket, where Committee Chairman Mark Alessi said the party was impressed with the enthusiasm Beedenbender brings to the table.

"Everyone had an interest," Alessi told Newsday. "But everyone was inspired by Brian's passion to do the job."

Beedenbender, 32, has served as Lesko's chief of staff since the beginning of 2010. He previously served one term in the county legislature before losing a race to Legis. Tom Muratore, R-Ronkonkoma.

In addition to Romaine, other possible GOP candidates include Assemblymen Dan Losquadro, R-Shoreham, and Dean Murray, R-East Patchogue, as well as Romaine's counterpart in the Legislature, Muratore.