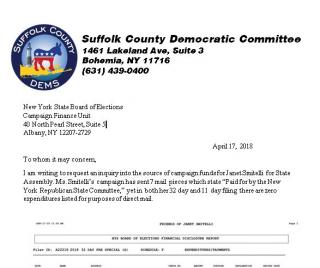 Republicans called the disclosure issue nothing more than a routine billing matter and accused Democrats of trying to create a distraction.

It was the latest barbed exchange in the contest between Smitelli and Democrat Steve Stern ahead of Tuesday’s special election to replace Chad Lupinacci, who resigned the 10th District Assembly seat after his election as Huntington Town supervisor.

This time, Democrats are focusing on Smitelli’s campaign mailers, which state that they were funded by the Republican State Committee.

But the costs aren’t reflected in the latest campaign-finance statements filed by the state committee, the Republican Assembly Campaign Committee or Smitelli’s campaign committee.

“It’s like she’s trying to conceal sources” of campaign funds, said Matt Jennings, executive director of the Suffolk County Democratic Committee. He said the complaint was filed with the state Board of Elections, which declined to comment.

A spokesman for the Republican Assembly Campaign Committee said it hadn’t been billed for printing by Friday, the day the latest campaign-finance statement had to be filed.

“We didn’t have the billing until a day or so ago, so no check had been cut,” said GOP spokesman Arnie Rothschild. He said the payments would be reflected in the next filing, which isn’t due until after the election.

Last week, Republicans asked the state Ethics Commission to investigate what they said were inconsistencies in Stern’s most recent financial-disclosure filings. A Stern spokesman called that a “typical, last-minute tactic trying to distract from the issues.”