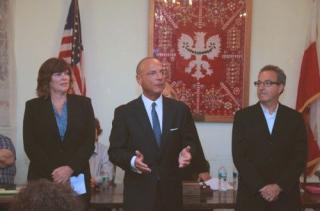 In a low-key party convention that contrasted sharply with the goings-on at the meeting of their Republican counterparts at Polish Hall last night, Riverhead Democrats picked their slate at the Polish Town Civic Association headquarters.
Anthony Coates, longtime ally and former paid political adviser to the supervisor won the nomination unanimously.
The Democrats nominated political newcomers Neil Krupnick and Laura Jens Smith for town council, passing over Riverhead Move the Animal Shelter founder Denise Lucas.
The party’s rhetoric was optimistic and energized after the vote. The candidates seemed confident that elections this November will finally end six years of one-party rule in Riverhead, where the town board has been exclusively Republican since Sean Walter ousted Phil Cardinale in 2009.
“I think this is the year for the Democrats,” Krupnik said. “I think we have a great chance of reclaiming Town Hall.”
“The poorest, most indebted, lowest bond-rated, highest-taxing town on the East End. That’s our legacy of six years of one-party government in this town,” Coates said to applause and cheers.
2015_0526_dems_3
The Riverhead Town Democratic Committee’s slate of candidates, from left: Neil Krupnick for council member, Diane Wilhelm for clerk, Jeanmarie Costello for justice, Anthony Coates for supervisor, Laura Jens Smith for council and Gregory Fischer for assessor.
Photo: Peter Blasl
Lucas sat expressionless with the other candidates as committee members called out their votes. She lost the nomination to Smith by 707 votes and to Krupnik by 1,177.5 votes.
“I need to go home and evaluate what happened here tonight,” said a somber Lucas after the convention. She had not yet decided if she would run a primary for the Democratic nomination.
Jeanmarie Costello won the Democratic nod for town justice. Lori Hulse, whose name was placed in nomination at both party conventions tonight, said in an interview afterward she intends to challenge Bob Kozakiewicz for the Republican line in a primary.
“I really think the position should be apolitical,” Hulse said. “It should be based on qualifications, and I’d really like the voters of Riverhead to decide who the most qualified candidate is.”
Incumbent town clerk Diane Wilhelm was unchallenged in her bid to seek a new term.
Democrats again chose Gregory Fischer as their candidate for tax assessor. Fischer, who ran for assessor in 2013, had his hat in the ring for town council as well. This time out, Fischer will be one candidate in a three-way race for two open assessor seats; both Republican incumbents are seeking re-election.
“We picked a good slate, a strong slate, a group of very intelligent people who will serve the Town of Riverhead well,” Democratic chairwoman Marge Acevedo said in an interview last night.
Katie Blasl contribut