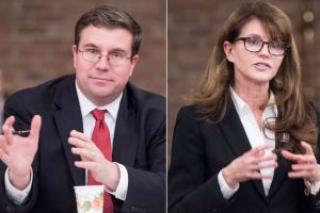 Democrats Dave Calone and Anna Throne-Holst are locked in a competitive — and expensive — primary Tuesday for the chance to face freshman GOP Rep. Lee Zeldin in what is expected to be one of the nation’s most competitive general election congressional races in November.

Calone, 42 of Setauket, is the former chairman of the Suffolk County Planning Commission and president and CEO of the venture capital firm Jovian Holdings.

Calone points to his work on environmental issues while on the planning board, such as streamlining the permitting process for rooftop solar projects and his work in the private sector helping technology startups on Long Island.

Throne-Holst, 56 of Sag Harbor, served for six years as Southampton town supervisor before deciding not to seek re-election last year to focus on the 1st District congressional campaign full-time. Before that, she had run a nonprofit school on the South Fork.

Throne-Holst touts her record during her three terms as supervisor, when the town’s credit rating increased and the town pursued open-space policies and the opening of a clean water technology center.

During the campaign, Throne-Holst has attacked Calone’s tenure on the Long Island Power Authority board before superstorm Sandy and his votes for electric rate hikes.

Calone has criticized Throne-Holst for contributing to the Suffolk County Conservative Party and for only registering as a Democrat last year, after belonging to the Independence Party and also spending many years unaffiliated with any party.

The 1st District traditionally has been one of Long Island’s most competitive, with voters who regularly throw out Democratic and Republican incumbents. Republicans outnumber Democrats in the district 161,638 to 145,983, but more than a third of voters are unaffiliated with the major parties.

The district covers the eastern half of Suffolk County, and includes Brookhaven, Riverhead, Southold, Shelter Island, East Hampton, Southampton and slivers of Smithtown and Islip. Brookhaven Democrats make up 62 percent of the primary electorate.

In 2014, six-term Rep. Tim Bishop (D-Southhampton) was defeated by Zeldin, a state senator and Iraq War veteran from Shirley. Democrats view Zeldin as vulnerable with GOP presidential nominee Donald J. Trump heading the ticket, although Suffolk Republican leaders point to Trump’s strong showing in the county during the Republican presidential primary in April. The nonpartisan Cook Political Report has placed the race into the “tossup” category.

Both candidates have compiled long lists of endorsements.

Calone has the support of 18 local elected Democrats, including Assemb. Steven Englebright (D-Setauket) and Suffolk County Legis. Bridget Fleming (D-Southampton), who served with Throne-Holst on the town board. The Brookhaven Democratic Committee also backs Calone.

Throne-Holst said she made contributions to Conservatives to attend fundraisers as part of her responsibilities on the town board. She called the attacks “baseless and disingenuous” and has criticized Trump as a racist and misogynist.

While she sought the Conservative nomination in her runs for town supervisor, she never received the nod because her positions on gun control and abortion were out of step with Conservatives, she said. Throne-Holst said she did not register with a party when she moved to Southampton because, “it was well known you couldn’t get a job in Southampton with a ‘D’ after your name.” She later registered with the Independence Party to run for supervisor.

Throne-Holst attacked Calone for voting for LIPA rate hikes and blamed him for LIPA’s response to superstorm Sandy. “I certainly hold management responsible,” for widespread power outages, she said.

Calone said she has “wildly exaggerated” his role in storm preparedness. He took the volunteer position on the 15-member board in 2009 to push for a renewable energy plan, he said. In 2010, he briefly headed a committee that prepared a report on how to get electricians onto Long Island during major outages.

“Superstorm Sandy was a tragedy and it is shameful that Anna is politicizing it for her benefit,” said Calone. He said the electric rates went up less than 1 percent during his time on the board and the only rate increase he voted for was tied to increased spending on renewable energy.