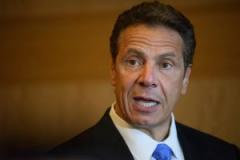 ALBANY — Gov. Andrew M. Cuomo established a statewide “hotline” Tuesday to report hate and bias crimes and incidents after an “explosion” in “bias-motivated events,” including displays of swastikas and Confederate flags in White Plains, Wellsville, Geneseo and other parts of New York following Donald Trump’s win in the presidential election.

Cuomo, a Democrat, said the State Police, the state Division of Human Rights and university police around New York would investigate acts he called not only immoral but illegal.

Schools, universities and neighborhoods have reported an array of “bias-motivated acts” in the week since Republican Trump defeated Democrat Hillary Clinton to become president-elect:

h In Wellsville in the Southern Tier, someone painted a swastika along with the words “Make America White Again,” a riff off Trump’s slogan “Make America Great Again.”

h At the SUNY Geneseo, someone painted a swastika and pro-Trump graffiti in a residence hall.

h Pro-Trump students drove around the LeMoyne College campus in Syracuse, with one truck displaying a Confederate flag, leading to a student standoff. LeMoyne President Linda LeMura called the flag display “deeply upsetting and antithetical to our Jesuit heritage.”

h Along the Bronx River Parkway bikeway in White Plains, swastika and the words “White Power” were painted. Westchester County Executive Rob Astorino called it a “hate crime” that is under investigation.

h A Saratoga County school superintendent sent a letter to every parent in the district, alerting them to an increase in “extreme bigotry” incidents since Election Day.

The governor said any “acts of discrimination or intimidation will be met with the full force of the law.”

“Hateful rhetoric or hateful slogans are not just immoral, unethical, not nice. They are also illegal in the state of New York,” the governor said while attending an economic-development event in Rochester. “We have a very strict hate crimes law that we take seriously and we want people to know we’re going to enforce it.”