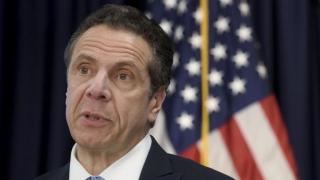 ALBANY — Democrats finally won a numerical majority in the State Senate after Tuesday’s special elections, yet a conservative Democrat who says he will continue to sit with Republicans has delayed that victory, even as Gov. Andrew M. Cuomo urged him to reconsider.

Cuomo, head of the state Democratic Party, told Sen. Simcha Felder (D-Brooklyn) that Tuesday night’s win by two Democrats to fill vacant Senate seats means he must now leave the Republicans before the November elections to form a Democratic majority and take over the Senate.

“It’s all on him,” Cuomo said Wednesday.

When Tuesday’s winners — Shelley Mayer of Westchester and Luis Sepulveda in the Bronx — are sworn in, the Senate Democrats will have 32 seats if Felder joined them. That’s the number of votes needed to control legislation.

Cuomo said Felder’s refusal to join the Democratic fold means that important Democratic issues such as gun control, campaign finance reform, early voting, and others would be lost in gridlock as they were in budget negotiations in March.

“The choice is do nothing, stay with the Republicans . . . or go with the Democrats and actually take action on these issues,” Cuomo said.

Felder said Tuesday that he’s sticking with the Republican majority, at least until the November elections, because he wants to avoid a political battle and gamesmanship that would disrupt the remainder of the session, which is scheduled to end June 20.

“For either side, a one-vote controlling margin will be a nightmare, again, so Felder may have more play than seems obvious now,” said Richard Brodsky, a former Democratic assemblyman who teaches at the Wagner School at New York University.

“Despite going up against political history and voter enrollment, our candidate ran a strong race,” said Senate Republican spokesman Scott Reif. “There are a number of Democrat-held seats that present better opportunities for us in November.”

“The New York City politicians who think it will be easy to flip the State Senate and impose their radical agenda on the people of New York should take heed,” Reif said. “Without us, it’s one-party rule.”

Tuesday’s elections, however, show Republican weakness not only in Westchester and in the Bronx, but in Assembly races in the Hudson Valley and on Long Island, where Democrats flipped the 10th Assembly District seat with a win by former Suffolk County Legis. Steve Stern, said Gerald Benjamin, distinguished professor of political science at the State University at New Paltz.

“The demographics are overwhelming,” said Benjamin, a Republican. “The handwriting is on the wall.”