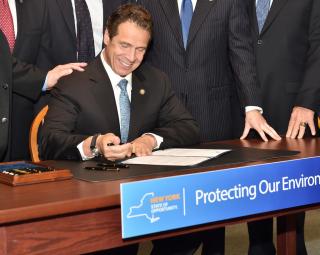 Gov. Andrew M. Cuomo Thursday killed a 3-year-old proposal to build a liquefied natural gas terminal 19 miles off Jones Beach amid fears that it could cause an environmental catastrophe or become a terrorist target.
The deepwater docking station known as Port Ambrose was to supply the downstate region with cheaper natural gas brought in from the Caribbean by tankers.

But Cuomo, in formally announcing his veto, said al-Qaida has threatened to target such facilities and superstorm Sandy was powerful enough to damage infrastructure built to survive 100-year storms.
Cuomo also said the fuel port would harm vital commercial squid and scallop fishing and conflict with a major wind farm proposed for the same waters.
"When you put all of those things together, the reward was not worth the risk," he told about 200 opponents of the project in Long Beach.

Coastal residents, public officials and activists, from surfers to the Sierra Club, gave the governor a standing ovation. Cuomo, who opposed fracking in New York a year ago, was praised for rejecting a fossil fuel project in favor of encouraging more sources of renewable energy.
The chief executive of Liberty Natural Gas, the New Jersey-based company that submitted Port Ambrose for federal licenses in 2012, said he didn't expect a veto.
"We're surprised and disappointed," Roger Whelan said from London, where he was working on another natural gas project.
"Obviously, without the support of the governor, there's no path forward in New York," he said.
Whelan noted that federal regulators did not find any major obstacles in their final environmental impact statement and that importing natural gas through Port Ambrose would have softened winter spikes in fuel costs that are passed on to consumers.

Tankers docking at the station would have regasified the fuel and pumped it through pipes buried at least 15 feet under the ocean bottom, including a 22-mile-long main that would hook up to an existing delivery system.

With two states affected, either Cuomo or New Jersey Gov. Chris Christie had the power under federal law to kill the proposal if they took action by Dec. 21. The veto doesn't prevent Liberty from returning with another proposal.
In 2011, Christie vetoed Liberty's first proposed gas terminal, located closer to New Jersey and busy shipping lanes. The following year, the company filed the current proposal, which had the support of many business, energy and labor groups because of its promise of new jobs, cheaper gas and an additional source of fuel.
Residents across the region, state and local lawmakers and the New York City Council opposed the project.
Assemb. Todd Kaminsky, a Democrat who represents Long Beach, said he was "overjoyed" by the veto. "This sends a clear message that there is no state in this region that will tolerate this," he said.

Nassau County Executive Edward Mangano backed the governor's decision "to protect the security of our island and quality of our environment."
Rep. Kathleen Rice (D-Garden City) called it "a victory for all the people in our communities who . . . made it clear that this project does not reflect our priorities."
Opponents of the gas terminal said they will now focus on pushing wind energy project in the Atlantic.
"Today is a turning point for New York State moving away from fossil fuel and toward renewable energy," said Adrienne Esposito, executive director of Citizens Campaign for the Environment. "We had to fight -- people power against energy interest."
Cuomo said if any energy project is built offshore, it needs to be renewable. In a letter notifying the federal Maritime Administration of his veto, the governor said Port Ambrose would take as much as 20 percent of the area being considered for a wind farm that could power about 700,000 homes.
Many uncertainties surround the long-delayed wind project put forward by LIPA, the New York Power Authority and Con Edison. Federal officials recently said it still could be rejected.
In making his announcement, Cuomo said his thoughts kept going back to Long Island's beaches, which he's enjoyed since childhood.
"When you see Jones Beach and you see that strip of sand along Long Island, there is nothing like it," Cuomo said. "So this is really a sensitive jewel that we have been given to hold in public trust."
With Robert Brodsky