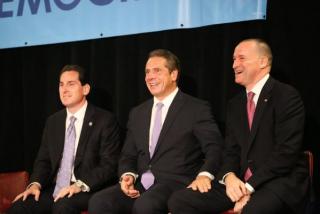 Gov. Andrew M. Cuomo headlined a rally Monday in Albertson to endorse a pair of Nassau Democratic state Senate candidates involved in hotly contested races that could determine whether Republicans maintain control of the chamber.

At the Nassau rally, Cuomo said as state attorney general he worked with Kaminsky, then a federal prosecutor, on public corruption cases. Last year Cuomo also appointed Haber to the Nassau Interim Finance Authority, a state monitoring board in control of the county’s finances.

“I know what their values are and I know they will be extraordinary as senators serving the people of their district in Albany,” Cuomo told a crowd of more than 200 political and labor leaders.

Kaminsky faces Republican Chris McGrath, an attorney from Hewlett, in a rematch of their April special election. Kaminsky defeated McGrath by fewer than 1,000 votes in the special election following the corruption conviction of Dean Skelos.

Haber, an East Hills businessman and Roslyn school board member, will face Republican Elaine Phillips, mayor of the Village of Flower Hill.

The contributions are expected to appear in the 11-day pre-general election campaign filings, scheduled to be released Friday.

At the Suffolk Democrats’ dinner Monday night in Holbrook, Cuomo announced his backing of Gregory, presiding officer of the Suffolk County Legislature, in his campaign against Rep. Peter King (R-Seaford).

“If you don’t win the House and Senate . . . they will gridlock Congress,” Cuomo said of Republicans. “Conservatives’ whole campaign is that government is bad. So with gridlock they win.”

Cuomo said Gaughran and several Nassau contenders whom he endorsed earlier in the day, “are exactly the kind of people we need to be here.” He said “Albany has its share of political hacks . . . and it is a bipartisan hackdom. We need those guys who are going there for the right reason.”

“Jimmy Gaughran, I’ve known . . . 30 years,” said Cuomo. “My father loved him, everyone in this room knows him. We should break our rear end for him.”

Cuomo, who passed gun control and gay marriage legislation with a Republican-controlled State Senate, has been criticized in the past by some progressives for not supporting Democratic candidates running against GOP incumbents.

Cuomo Monday pledged to work with Senate Democrats to pass a ban limiting the amount of outside income that can be earned by Albany officials. Senate Republicans oppose limits on outside income.

“There’s a lot at stake in this election, and the Senate Republicans are in Long Island’s corner,” Reif said. “The Senate Democrats are not.”

Senate rules require 32 votes to pass legislation. There are 31 Republicans, plus a conservative Democrat who sits with the GOP conference to form the majority. There are 26 mainline Democrats and five Democrats in the separate Independent Democratic Conference, which pledges to remain an independent and likely pivotal conference.