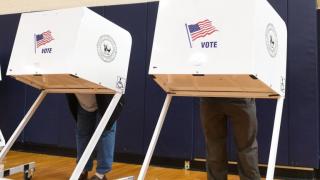 The highest turnout for any contest in Suffolk County in last week’s election was for the proposition to create a state constitutional convention, which drew 31.9 percent of registered voters, 50 percent more than the off-year turnout four years ago.

The vote on the convention drew 304,855 voters in unofficial returns — more than the turnout for the countywide district attorney and sheriff contests, even though the referendum was on the back of the ballot. The convention proposition was defeated by 86.6 percent.

The final turnout will rise when 15,060 absentee ballots are counted later.

By contrast, Suffolk’s off-year election turnout four years ago was only 189,435, or 20.9 percent, of registered voters.

The turnout numbers will rise when 13,939 absentee ballots are counted.

Carl Korn, spokesman for New York State United Teachers, said the union made more than 70,000 calls to turn out the vote against the convention proposition across Long Island.

“When we organize, mobilize and turn out the vote, labor has a strong voice in elections,” said Korn.

Joseph Mondello, Nassau Republican chairman, said the convention referendum was among factors, including indictments of town and county officials and infighting among Hempstead Town officials, that contributed to GOP losses last week.

“It was a perfect storm and it took its toll,” he said. “Had you taken any one of them away and we would have been successful.” The vote on the constitutional convention, had said, “was very significant” because it brought out a lot of people who were not our voters.”

Jesse Garcia, Brookhaven Town Republican chairman, called the referendum a “wild card” with an unpredictable outcome. But he said town Republicans in recent years “have gone back to heir roots,” redeveloping strong ties to trade and other labor unions. Garcia also noted that GOP candidates all opposed the convention, insulating them from negative impact.

Richard Schaffer, Suffolk Democratic chairman, laid the spike in turnout in Suffolk to the convention.

“Turnout was way beyond what we expected,” Schaffer said, “We were modeling for a turnout of about 200,000.”

He said the lesson of the referendum turnout is: “If people feel they are personally affected by an issue, it’s what makes them show up.” He added, “Maybe we should schedule it every year.”