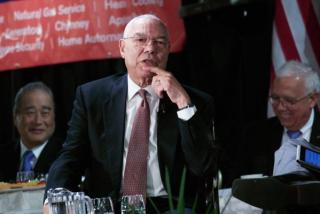 Former Secretary of State Colin Powell told an audience of more than 1,000 Long Island business and political leaders Tuesday that he will vote for Democrat Hillary Clinton for president, citing her experience, temperament and — in a jab at GOP nominee Donald Trump — her “stamina.”

Powell, speaking at the Long Island Association fall luncheon in Woodbury, was harshly critical of Trump, arguing that the New York businessman was “not qualified” to serve as commander and chief and had sold Americans a “bill of goods” that he cannot deliver.

“He insults us every day,” said Powell, who served as secretary of state under Republican President George W. Bush.

The people Trump has insulted most, Powell said, are his own supporters, “because they are being sold a bill of goods.”

Powell, who served as chairman of the Joint Chiefs of Staff under George H.W. Bush and Bill Clinton, also has been critical of Clinton.

Clinton reportedly told FBI investigators that Powell had advised her on the use of a private email server while she was secretary of state. Powell has said he has no recollection of the conversation.

Nonetheless, Powell called Clinton a “friend” whom he has known for 20 years.

“She is smart. She is capable. She was a good secretary of state,” Powell said. “She is balanced, she has temperament, and no matter what anyone says she’s got stamina ... I think she is fully qualified to serve as the president of the United States and I think she will serve it with distinction.”

Trump has said Clinton lacks the “stamina” to serve as president.

The Clinton and Trump campaigns did not respond to requests for comment on the endorsement.

In hacked emails from Powell’s private account that were made public in September, Powell, a retired four-star general said “everything [Clinton] touches she kind of screws up with hubris.” In another email, Powell said he would “rather not have to vote for” Clinton but that “she is a friend I respect.”

Powell, in his private emails, reserved his harshest criticism for Trump whom he called an “international pariah” and a “national disgrace” with “no sense of shame.” And he said Trump’s “birther” movement that Obama was not born in the United States was “racist.”

Powell said the hack made him more cautious in the use of email. He said he now only uses it for “the most basic housekeeping needs.” For other purposes, Powell said he uses telephones and fax machines.