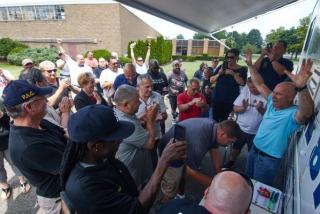 Teamsters Local 812 workers voted 83-12 Saturday to ratify the contract. The union members, who went on strike against the East Yaphank distributor on April 23, reached a tentative agreement with the company through a private mediator on Thursday.

“We’re extremely happy that we will get our employees back to work,” Sean Rose, the company’s chief executive, said Saturday.

Workers and labor leaders gathered Saturday outside Clare Rose’s Melville distribution facility to celebrate what Roger Clayman, executive director of the Long Island Federation of Labor, called a “a great win for labor.”

“There was a lot of relief today,” said Mark Pooler, a 26-year delivery driver. Pooler said the 82-day strike took a toll on his home life. “The time away from my family was the biggest issue,” he said.

Union members went on strike after the company proposed eliminating a sales function drivers provided, resulting in what the union said would be a 30 percent wage cut. Members also objected to a planned conversion from a pension to a 401(k).

Under the new agreement, the company will continue to contribute to the workers’ pensions. The drivers’ sales function will be eliminated, but pay remains above industry standards, the union said.

Still, both parties said it will take time for emotions to settle down.

“We were put with our backs up against the wall, and it did cause some tensions to get high and harsh words to be said,” said Louis Chiarelli, a warehouse worker and shop steward at Clare Rose. “We all have to find a way to let that go on both sides so that we can get back to work.”

Rose said there will be “a healing process, but I have all the confidence in the world that we’ll get back to the business at hand.”

Clare Rose is the exclusive Long Island distributor of Anheuser-Busch InBev products, such as Budweiser and Bud Light, serving 5,000 businesses in Nassau and Suffolk counties.