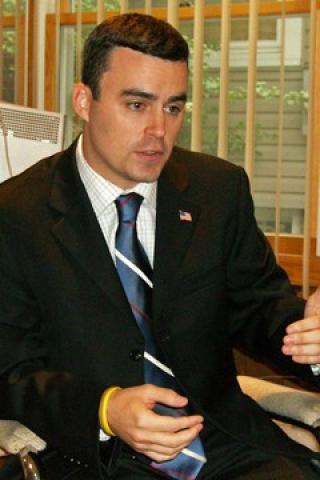 The Brookhaven Town Democratic Committee has named Brian Beedenbender as its nominee to replace Supervisor Mark Lesko, who last week announced his plan to resign after he presents his 2013 budget next month. Beedenbender currently serves as Lesko's chief of staff.

The town will hold a special election in November to fill the spot Lesko will be vacating. Deputy Supervisor Kathy Walsh (R-Centereach) will be the acting supervisor until the special election.

"In the time that I've worked with Mark, we've made our entire plan and agenda about moving forward," Beedenbender said in a phone interview Wednesday. "There's more to do, and that's why I'm running. We're on the right track."

Democratic Committee Chairman Marc Alessi said Beedenbender was chosen because of his experience at the town and his drive for the position.

"He's our guy," Alessi said in a phone interview Tuesday. "All the candidates that were originally interested saw how passionate Brian is … and we all decided he's our best candidate."

Prior to arriving in Brookhaven, Beedenbender served one term as a Suffolk County legislator before losing his re-election bid to Legislator Tom Muratore (R-Ronkonkoma) in 2009. He was also a legislative aide to former Suffolk County Executive Steve Levy from June 2004 through December 2007.

Beedenbender, 32, said he learned a lot from Lesko, especially about working with business owners throughout the town. He said he would continue to meet with them to help spur job growth.

Alessi doesn't think Beedenbender's lack of experience in elected office will hurt him in the eyes of the voters.

"I think the voters aren't looking for career politicians," he said. "I think at the end of the day, they're looking for someone who can do the job."

Alessi said Beedenbender's experience working for the town and on its budget made the decision easier.

Jesse Garcia, Brookhaven Town Republican Committee chairman, said it was "irrelevant who the Democrats put forward" and that his party had already "soundly" defeated Beedenbender in the past.

Beedenbender called his loss in 2009 a "foolish argument" to bring up in this race. "I lost an election. It happens," he said. "But I'm running for Brookhaven town supervisor. I have the experience. I know Brookhaven."

Although the Republican Committee has not yet formally chosen an opponent for Beedenbender, Suffolk County Legislator Ed Romaine (R-Center Moriches) announced that he was seeking the party's nomination.

"As town supervisor, I will consolidate government functions, increase accountability, end deficit spending and work to develop waste management alternatives," he said in a statement.

"We will 'reinvent Brookhaven' by [streamlining] government, by making it more responsive to its residents, by working to resolve quality-of-life issues, by making our town a better place to create jobs and by preserving our environment," Romaine added.

Garcia said his committee will meet within a week to discuss who will be its candidate, but declined to say when an announcement would be made. He said the party is "very excited" that Romaine is interested in the position.

Garcia said Muratore and Assemblymen Dean Murray (R-East Patchogue) and Dan Losquadro (R-Shoreham) had expressed interest. However, the latter two are running for re-election to their state positions.

Walsh, who was reelected last November without the backing of her party, said she "hasn't had any conversations" with the GOP about running in the special election, though she would be "honored" to do so.

Councilman Dan Panico (R-Manorville) was critical of Lesko's timing in leaving the town.

"We as elected officials have a responsibility to the people who have given us the privilege to serve, and he is essentially reneging on that responsibility during extremely tough budgetary times," Panico said.

Panico said his No. 1 priority is to get the budget ready and that it was too early to say if he would run for the supervisor position in the special election.