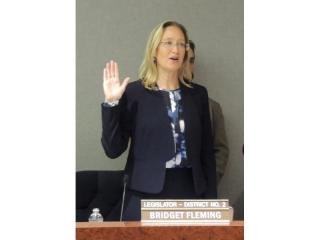 The Suffolk County Legislature hosted its 2016 organizational meeting on Tuesday, at which its 18 recently elected members took their oaths of office, including 2nd district Legislator Bridget Fleming.

“I’m pleased to be joining such a professional group of legislators, who are clearly committed to the best interests of our community, and I look forward to representing the unique needs of Suffolk County’s East End,” Fleming, who is the only new member of the Legislature in 2016 said. “As a Southampton Town Councilwoman, I focused my efforts on three areas that are critical to the East End: providing economic opportunity, defending the environment and keeping government accountable to the citizens it serves. As a county legislator, I will continue to focus my attention on those key priorities in addition to the other needs of my constituents.”

He succeeds last year’s Deputy Presiding Officer Jay Schneiderman, who was termed out of his 2nd District legislative seat after 12 years of service. He is now supervisor of the Town of Southampton.

The Legislature also re-appointed Jason Richberg of West Babylon as Clerk of the Legislature and named Amy Ellis of Mount Sinai the Chief Deputy Clerk.

George Nolan of Bayport was re-appointed Counsel to the Legislature, and Dr. Robert Lipp of St. James was appointed to his first full term as Director of the Legislature’s nonpartisan Budget Review Office.

Speaking at the meeting, U.S. Senator Chuck Schumer called the Suffolk County Legislature “one of the best in the country.” County Executive Steve Bellone was also in attendance to congratulate the legislators.