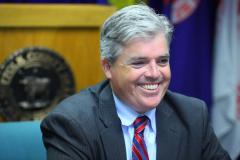 Bellone Tuesday revealed his "state agenda" for 2013, after a year in which his office received most of its requests, including authorization to expand the red light camera program and open a local traffic violations bureau.

At the top of Suffolk's wish list for next year is one item it asked for in 2012 and did not receive: approval for Suffolk Off-Track Betting Corp. to open a video lottery terminal complex similar to the "racinos" at some state horse racing tracks. A recent OTB study estimated that 2,000 slot machine-like gaming terminals could generate $174 million a year for Suffolk County school districts and municipalities.

"The fact is that gaming is occurring in the region, but the money is leaving Suffolk County," Deputy County Executive Jon Schneider said. "This keeps the money in the county."

"Right now the focus is on a couple of targeted items for Suffolk County that we think stand a good chance of passage," he said. "These are things we think can get done."

Also on Suffolk's state agenda are requests for:

-- Relief from the mandate that it pay the tuition difference for students who attend costlier community colleges outside of the county. Suffolk recently started passing some of that cost to towns, but still has budgeted $3 million next year to pay for its portion.

-- An adjustment to the state aid formula for county child care subsidies, which does not allow Suffolk's calculation of future needs to factor in federal stimulus money received in 2010. As a result, the county has cut in half eligibility for the working poor, from 200 percent of the federal poverty level -- $46,100 in income for a family of four -- to the federal poverty level of $23,050 for the same size family.

More than 2,000 county children lost day care this year because of the change, and officials said Suffolk will spend $3.4 million in 2012 to ensure that more aren't impacted.

-- Authority to lower property-tax assessments on properties damaged by superstorm Sandy. Two state lawmakers from Long Island -- Assemb. Robert Sweeney (D-Lindenhurst) and Sen.-elect Phil Boyle (R-Bay Shore) on Monday announced such a proposal (similar to a law passed in the wake of Tropical Storm Irene in 2011) that covers properties that sustained a loss in value of 50 percent or more.

-- Legislation to allow the county's Judicial Facilities Agency to borrow funds to buy the H. Lee Dennison Building in Hauppauge, providing the county with $70 million to close its remaining 2013 budget hole. The county then would make lease payments to cover the borrowing costs.