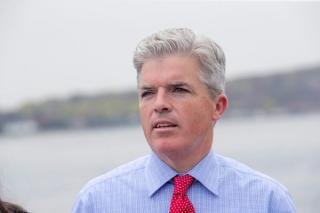 Suffolk County Executive Steve Bellone on Sunday touted his Connect Long Island plan to attract young professionals to the region with more mass transit options and vibrant downtowns, saying in a radio interview he wants to lead "one of the best, hottest places in the country for young people to be."

"We have to reverse the brain drain," Bellone said. "We've got to get young people wanting to be here in Suffolk County, on Long Island, put stakes down here if we're going to have an innovation economy."

Bellone, a Democrat who is running for re-election in November but does not yet have an opponent, appeared on "The Cats Roundtable" on WNYM/970 AM. He said Suffolk County has eliminated the $450 million deficit he inherited when he took office in January 2012 and is whittling its $200 million structural imbalance.

He said he envisions a network of downtowns filled with "innovation jobs" and "connected by great public transportation to our universities, our job centers, our research centers and our parks and open space."