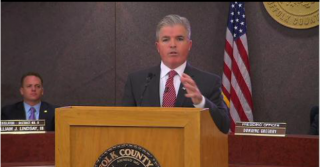 Suffolk is preparing a home-by-home analysis of areas to be connected to sewers as part of the county's push to address nitrogen pollution in local waterways, County Executive Steve Bellone said in his State of the County address Wednesday night.

Bellone devoted the largest portion of his 58-minute speech at the William H. Rogers Legislative Building in Hauppauge to the issue of water quality.

He also said the county has made progress in reducing its structural budget deficit, noting that the county payroll has declined by 1,000 workers since he took office in 2012.

Bellone has made nitrogen pollution from septic tanks and cesspools his top priority this year. Suffolk will have "firmly identified the scope of the problem" through the home survey, which will use existing county data, by the end of the year, he said.

After the speech, he said he would have a price tag for portions of the sewer plan in a few weeks.

His speech was watched by 150 invited guests, elected officials and members of the county legislature.

The survey will recommend homes that should be hooked up to sewers, and those that should install new septic systems or join small regional waste treatment systems of between 50 and 100 homes. The program will not mandate compliance, however.

Bellone acknowledged that extending sewers in Suffolk -- where 70 percent of homes are on septic systems -- will cost billions. He offered no details about where the money will come from, other than saying he will seek to leverage private dollars with the help of state and federal governments.

"This is a year of action for our water," Bellone said. "Nitrogen poisoning of our surface and groundwaters is the greatest crisis this county has faced in generations."

High concentrations of nitrogen threaten drinking water, damage tidal wetlands and salt marshes, and harm bays and rivers around Long Island, according to a report Bellone released in January.

Bellone also repeated his call to consolidate the comptroller's and treasurer's offices to save money. The Suffolk County Legislature passed a bill last year to put the question to voters in a referendum, but a court struck down the initiative.

"I was very disappointed there was no mention of our drug problem," he said.

Legis. Kate Browning (WF-Shirley) said, "There were some good initiatives." But she noted there was no mention of one of the biggest sewer projects, in the Mastic-Shirley area.

Bellone, a Democrat who announced in December he will run for re-election in 2015, said new contracts negotiated with unionized employees have lower salaries for new hires and require them to pay a portion into health insurance for the first time.

"We have been through the worst fiscal crisis in our county's history, and though we're not out of the woods yet, we do see daylight ahead," Bellone said. He said he would not support a budget that pierces the governor's property tax cap.

He noted that Suffolk over the past two years has been through wildfires, superstorm Sandy, a historic blizzard and "this winter, it seems like a new snowstorm every week . . . The state of our county today is resilient."