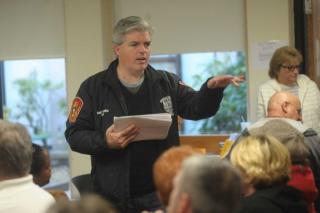 In the weeks after superstorm Sandy, Suffolk County Executive Steve Bellone became the public face of the county's recovery efforts. In this story, Bellone recalls his experiences in the worst local natural disaster in decades.

It was 30 miles from Suffolk County's emergency center in Yaphank to Copiague, where the only way to reach residents trapped in their flooded homes was with long-arm bucket trucks.

As Suffolk County Executive Steve Bellone drove west along Sunrise and Montauk highways in the early morning of Oct. 30, hours after superstorm Sandy hit, there was hardly a streetlight, storefront, traffic signal or porch lamp with power.

"Just the darkness. That's what stands out," Bellone recalled. "It was remarkable."

When he finally saw the destruction in daylight, on low-lying Atlantic Street in Lindenhurst, it was "stunning."

"It looked like a scene from Beirut or something. Everything was devastated: houses, debris everywhere -- objects all over the place," Bellone said. "It looked like things had been blown up, in some cases."

From then on, Bellone, in office less than a year, became the face of Suffolk's response to the worst natural disaster on Long Island in nearly 75 years.

Bellone put aside negotiations over the county budget and how to close a $150 million deficit. He turned his attention to inspections of communities such as Fire Island, where waves had breached the dunes and tossed around dozens of oceanfront homes. He was highly critical of the Long Island Power Authority's efforts to restore electricity.

The county executive said that of all his Sandy experiences, one moment stands out.

On Oct. 30, he visited Mastic Beach and was "blown away" seeing the Atlantic Ocean pouring through a large breach in the distance, on Fire Island.

As he tried to leave, one of the tires on his unmarked county SUV got stuck in a three-foot sinkhole of water. Before he could call for a tow truck, village residents arrived with one.

"Despite the devastation they faced themselves, they pulled right up and said, 'Hey, let me help you out, county executive,' " Bellone said. "That's been the story of what's happened. People helping each other out, no matter what."

Public policy experts said there's no playbook for a county executive's response to a disaster of this magnitude, which the state estimates caused $1.8 billion in damage to Suffolk. Those who watched Bellone, including Suffolk lawmakers from both parties, generally said he did well -- though one suggested he could have acted sooner to address gas shortages and LIPA's requirement of electrical inspections for homes in flood zones.

"There were decisions made that I wish had come sooner," said Legis. Tom Cilmi (R-Bay Shore). "But that said, hindsight is 20/20. We learn from what happens, and the county executive worked very hard."

Response to get reviewBellone, a Democrat, said in interviews that it was still too early to identify deficiencies in the county's storm response.

However, aides acknowledged that they were reviewing ways to better involve gasoline retailers in future disaster planning and to identify long-term housing for displaced residents.

"I'm a big believer in after-action reviews, but that's after the action's done," Bellone said. "People are trying to rebuild lives. This isn't over."

Bob McEvoy, a professor at the University at Albany's Rockefeller College of Public Affairs and Policy and former Schenectady County manager, said elected leaders must be out in public in such situations.

While McEvoy said he wasn't familiar with Bellone's storm performance, he said, "People want leadership. Even in the worst kind of disaster, you're never always on air. You're doing it between things, and you can easily spend time informing the public while your forces report in. If you have the right plan . . . you can execute it at the same time."

In the immediate aftermath of the storm, Bellone toured hard-hit regions with state and federal officials and held frequent public briefings.

More than a week after the storm, Bellone increased his visibility to begin criticizing LIPA almost daily for its requirement that all homes in flood zones -- even those with no damage -- undergo electrical inspections before power could be restored. LIPA's announcement meant that as many as 100,000 South Shore homes -- from the Rockaways to Mastic -- would need inspections. Frustrated residents, who had already gone 10 days without heat or electricity, demanded action. Ultimately, 45,000 homes were inspected.

"You had 90-year-old women staying in their houses, freezing . . . a guy standing on his car with a stick, trying to poke a transformer to reset it," Bellone said in mid-November at a FEMA recovery center in Lindenhurst, where he visited residents seeking temporary housing assistance. "It was a public health issue."

LIPA chief operating officer Michael Hervey declined to respond directly to Bellone, but said there'd be "plenty of opportunities to discuss the facts in the upcoming investigations and commissions that LIPA is openly participating in."

Bellone got his first inkling of how bad the storm would be on the morning of Oct. 29, hours before it made landfall. He was struggling to stand in the face of fierce winds at Smith Point County Park in Shirley, as waves overtook the beach, when an aide handed him a cellphone: Fire, Rescue and Emergency Services staff was recommending that Bellone immediately reach out to Fire Island residents who had ignored evacuation orders.

"They were saying those people were in serious danger -- mortal danger. That was the first time I'd heard it stated like that," Bellone recalled. "That's when I knew this wouldn't be like every other storm." He diverted to Robert Moses State Park, leading last-ditch efforts to reach more Fire Island residents.

But it wasn't until Nov. 16 that Bellone learned firsthand how badly the 32-mile long barrier island had been damaged. As he walked Ocean Beach, past people wheeling suitcases of belongings from waterlogged homes, some stopped him for hugs. "To be standing in a spot where, a couple of weeks ago, there were 16-foot dunes and now they're gone, it just gives you an incredible respect for Mother Nature," he said.