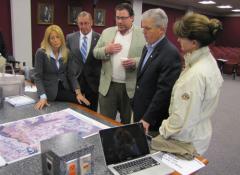 The Suffolk County Executive was given a bus tour of one of Southampton Town’s poorest, most crime-ridden, rundown neighborhoods Wednesday morning in hopes of getting his support for a number of ongoing efforts to revitalize the area.

And judging by Mr. Bellone’s comments following the tour, the plan may have worked.

“My overall impression is that it’s one of the more exciting planning opportunities and community revitalization opportunities that I’ve ever seen,” he said of the Riverside area in an interview. “It is something that has so much potential for great things.”

Southampton Town has a number of revitalization plans underway for Riverside, some of which will need county support in order to move progress forward in the hamlet. While the efforts have been in the works for years, they have recently started to take shape with the town’s contracting of a private development firm for the area, as well as the release of a request for proposals for a pedestrian foot bridge over the Peconic River.

Town officials will need county help as it considers the creation of a commercial sewer district for the area, as well as a redesign of the county-owned traffic circle into a two-lane, oval-shaped roundabout.

South Fork county Legislator and Deputy Presiding Officer Jay Schneiderman (I-Montauk) compared what Southampton officials are trying to do in Riverside to “Wyandanch Rising,” a planning effort which is aiming to revive a troubled neighborhood in Mr. Bellone’s town and was begun when he was Babylon Town supervisor.

“It won’t fit your typical image of the Hamptons, that’s for sure,” he said as the tour bus turned down Old Quogue Road.

Census figures list Wyandanch and Riverside as the two poorest hamlets in the county. Median income in Riverside in 2012 was estimated to be just over $33,300 in 2012, compared with about $86,300 across Suffolk.

“This is our hub, Steve,” Mr. Schneiderman said. “It’s like Wyandanch Rising. This is our Riverside Rising.”

The bus tour started off at the traffic circle, which has a boarded up diner on one corner and a boarded up gas station on another, and then toured the area on the south side of Flanders Road which is envisioned as a new Main Street, with ground floor stores and upper floor apartments.

As the group — including Mr. Bellone, Mr. Schneiderman and a number of Southampton Town officials — got out of the bus to get a closer look at this area, they unknowingly stood in front of a tree with a yellow sign on it that read, “Warning Notice. These premises have been placed under supervision of State Police Patrols.”

The group also toured an “enterprise zone” in the former Flanders Drive-in property, where the town hopes to attract industrial development, although only a few parcels have been developed so far.

From there, the bus drove down Old Quogue Road, which has a number of rundown houses and a couple of junk yards and auto repair shops in the middle of an otherwise residential neighborhood.

After that, they drove down a dirt road which the town highway department last year cleared of trees and underbrush in an attempt to ward off the drug dealers, illegal dumpers and prostitutes who were living there. The land had originally been purchased by the town to build affordable housing.

And where many may have seen a past magnet for crime, Mr. Bellone said he saw positive visions of the future.

“This is beautiful, from a planning perspective,” he said as he looked out the bus window at an empty lot that had been cleared by a bulldozer. “There are lots of opportunities. I think it looks amazing and the potential is extraordinary. This is something I think the county should be helping to implement with infrastructure.”

The group explained how much of the land in Riverside is off the tax rolls due to being either preserved parkland or government offices, and how environmental constraints have limited what can be built there in the past, particularly on the north side of Flanders Road along the Peconic River.

The master development plan will enable Renaissance Downtowns to try and either buy and develop land or work with private property owners to help them develop their land to create a tax base in the area.

Renaissance Downtowns is a private, for-profit development company, but its contract with the town will only make them money if the firm is successful in redeveloping land, Mr. McLean said.

Southampton Town is not paying the company anything, he said.

Renaissance Downtowns will be making a public presentation on its plans for Riverside at the next meeting of the Flanders, Riverside and Northampton Community Association on Monday, May 12, at 7 p.m. in the David Crohan Community Center.