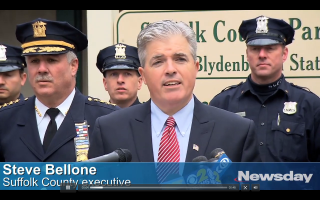 Bellone said at a news conference at Blydenburgh County Park in Hauppauge he hopes the bill can be passed soon, so the county can save on police department overtime this summer. The county's 2014 budget assumes the transfer would take place on May 1.

"There are going to be more services, better services to taxpayers," Bellone said.Suffolk Police Chief of Department James Burke said the transferred park officers will supplement a new class of 40 police recruits and be stationed at existing police precincts. Adding those officers will save on Suffolk County police overtime, Burke said. Also, the county would save money by not having to pay park police, who have not had a raise since 2010, retroactive pay in future labor settlements, according to the analysis by the legislature's Budget Review Office. The office estimates that the county will save $2 million in 2014.

County parks would be patrolled by new seasonal officers, many of them retired law enforcement officers, Bellone said.
Some lawmakers expressed reservations about the proposal.

Kennedy also said the new officers from parks would decrease the size of the new class of police recruits by 36.He noted that one of the benefits of new police contracts negotiated by Bellone over the past two years were lower costs of new police hires.