Bellone moves to turn over Amityville clinic to nonprofit 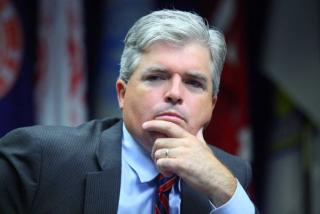 The administration of Suffolk County Executive Steve Bellone wants lawmakers for the first time to agree to turn over a county health center to a nonprofit operator and move county workers to jobs in other parts of the Health Department.

The proposal will provide net savings of $4.9 million over what it would cost to continue with county staffing, according to a fiscal impact statement.

The county legislature last year voted to allow HRHCare, based in Peekskill, to take over all eight county health centers. So far, the group has taken charge of the Coram health center and the South Fork satellite health clinic, which has moved from East Hampton to a new site near Southampton Hospital.

Both are staffed by local hospitals under contract with HRHCare.

The changeover at the Amityville health center is more complicated. The administration in its contract last year with the Association of Municipal Employees, the county's largest union, agreed to a no-layoff provision through 2016.
Bellone aides say the Amityville clinic has 46 county employees, and that some will move to the only other county-staffed health clinic in Riverhead.

Others will move to the new jail's medical unit in Yaphank and the rest will work in other patient care jobs in the Health Department at no loss in pay.

Bellone aides gave no more details. Deputy County Executive Jon Schneider said the Riverhead clinic is expected to be taken over by HRHCare before year's end.

Any agreement for Riverhead will include a provision to keep county employees in place until they can be absorbed elsewhere in the Health Department or retire.

Suffolk also is negotiating contracts with HRHCare to run county clinics in Shirley, Patchogue, Brentwood and Wyandanch, in conjunction with local hospitals.

While management will change, Bellone aides said the Amityville health center, which gets 12,500 visits a year, will keep Postal's name, and health services will increase to include dental and mental health care. They also said the sliding scale co-pay based on income will drop from the county's $35 to $75, to HRHCare's $15 to $35. County officials said the agreement will bolster federal and state aid payments, provide federal coverage for malpractice cases, and give the clinic access to federal programs that provide free vaccines to children.
Legis. John Kennedy (R-Nesconset), the minority leader, said he embraces the county's move to federally qualified health centers, but wants details to make sure the shift is handled fairly.

"It remains to be seen what the administration is putting forward," he said
"I won't support anything that directly or indirectly sheds or off loads jobs by shifting people to Greenport or something like that. That's not fair or transparent."

Presiding Officer DuWayne Gregory (D-Amityville) said he is "very comfortable" with the move and expects "a seamless transition" to HRHCare. "Not one employee is losing their job, and there'll be more services -- it's a win-win," he said.
Before the shift can occur, the county must hold two public hearings -- one set for April 10 in Riverhead and another on April 23 in Hauppauge.

Gregory also said HRHCare also will hold one in the local community. The proposal could come up for a vote in the county Legislature as early as April 29.