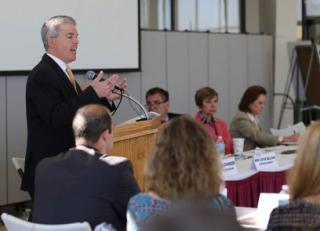 He said his Connect-LI plan would connect universities and downtowns through public transportation on major north-south corridors and create opportunities for innovation, which would help stop the exodus of Suffolk County residents. The program also emphasizes walkable downtowns, rail and bus service and economic development.

“We need to make it easier and safer for people to travel around Suffolk County, for our young people and to strengthen the economy,” Bellone noted. “At the same time, we must make drivers more aware of others, including non-motorists, who are on the roads.”

Two groups of industry experts give presentations, one on the implementation of Complete Streets, and a second group spoke on design and regulation.

Lavena Sipes, mother of Courtney Sipes, who was 11 when she was killed by a car on Main Street in Smithtown, was also a keynote speaker.

“But now is the time to move beyond concepts and build upon existing projects and implement new projects that not only spur economic development, protect our environment and improve quality of life, but also save lives in the process,” he added.

Bellone also addressed highway safety in a talk Saturday with members of a motorcycle organization who asked motorists to pay attention to others sharing the road. ABATE – American Bikers for Awareness, Training & Education – gathered to underscore the need for drivers to watch for motorcyclists, especially during lane changes and turns.