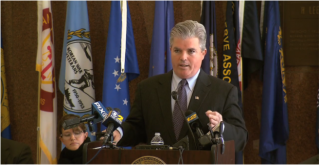 "We have been polluting this precious resource in a way that has had devastating impacts on our surface waters, shows negative declines in the quality of our drinking water and puts us at enhanced risks for future storms," he said. "For the health of our region today and for the sake of future generations, we must reverse these trends."

Bellone made the announcement in Hauppauge as he released the executive summary of the county's long-awaited Comprehensive Water Resources Management Plan, a draft of which was published in 2010 and had not been updated since 1987. The full report, delayed to include impacts recognized as a result of superstorm Sandy, could be out this spring.

Joined by local elected officials, scientists, environmentalists and representatives from the water supply and construction industries, Bellone said 70 percent of the county, or 350,000 homes, isn't hooked up to sewers. No one solution will fix the nitrogen problem, he said, but sewering some areas and upgrading septic systems are possibilities.

"Today will be known as the turning point . . . when collaboration became the mantra instead of fighting about what to do," said Adrienne Esposito, executive director of the Citizens Campaign for the Environment in Farmingdale.

Suffolk has identified 209,000 homes that could be connected to sewers or upgraded treatment systems. Each town is represented and wide swaths of the South Shore are included. The list will be cut to 100,000 homes based on housing density, water table levels and proximity to impaired waterways, said Justin Meyers, assistant deputy county executive for communications.

"Right now your water bill is relatively inexpensive," he said. "There is plenty of water in the aquifer. The issue is the cost to find clean safe drinking water, and also to treat the water will be astronomical if we do not turn this trend around."

Recovery is possible, said Kevin McDonald of The Nature Conservancy on Long Island, who pointed to a project in Tampa Bay, Fla., where nitrogen reduction efforts helped sea grass rebound. "If you can identify the offending pollutant [and] abate the threat, natural systems recover," he said.

Bellone said superstorm Sandy highlighted the harm nitrogen was doing to tidal wetlands and sea grass. After barrier islands, these systems provide another buffer to tides and winds.

"If we are going to protect ourselves from future storms we have to rebuild our coastal wetland defenses," he said. "The only way we can do that is if we start to take on this water quality crisis right now."

The final report will include specific solutions, possible funding sources and target areas for sewers and upgraded treatment -- a first step in charting a long-term course, Bellone said.

"This isn't going to be resolved in a year," said Long Island Farm Bureau executive director Joe Gergela. "It's going to take a long time to see the results of these efforts."