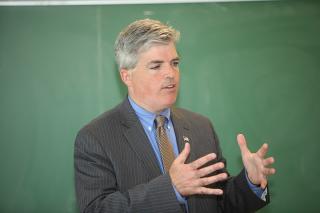 Babylon Town Supervisor Steve Bellone is announcing the kickoff to the First Annual Attainable Green Home Competition at a press conference on Tuesday, January 25th at 11:00am. The press conference will be held at 54 N. 15th Street in Wyandanch where Supervisor Bellone will be joined by Theresa Regnante, President and CEO of the United Way of Long Island, and Vince Capogna, Executive Director of the U.S. Green Building Council, Long Island Chapter.

Steve Bellone was elected Babylon’s 30th Supervisor in 2001 after serving a 4 year term on the Town Board.

Supervisor Bellone’s environmental and community revitalization initiatives have been nationally recognized for their pioneering and innovative approaches.

In 2008, he created the first property assessed clean energy (PACE) efficiency program in the country, Long Island Green Homes. He has lectured around the country and in Canada about this groundbreaking program that has been featured on CNN and in the NY Times and Washington Post. Babylon also became the first municipality on Long Island to adopt Energy Star standards for new home construction in 2006. Later that same year the town adopted the most comprehensive Green Building Code in the nation, requiring all new public and private buildings above 4,000 square feet to be LEED certified. Supervisor Bellone was named by the International Council on Local Environmental Initiatives (ICLEI) as one of eight leaders in the country driving green issues.

In 2002, he launched Wyandanch Rising, a comprehensive, community based approach to revitalizing the most economically distressed community on Long Island. In 2009, the NYS Department of State named Wyandanch one of just three “Spotlight Communities” in the state. Wyandanch Rising was also selected in 2010 by the United States Green Building Council as one of 10 projects in the nation to showcase the new LEED for Neighborhood Development standard.

The beautification of the Town has also been important to Supervisor Bellone. He created the Babylon Beautification program that is planting flowers throughout the downtowns and neighborhoods and roadways throughout the Town. He launched the million bulb program and the Green Roadways campaign in 2007, planting tulip and daffodil bulbs not on along town roads but state and county roads as well. Since launching the program, the Town has planted nearly 2 million bulbs.

Steve Bellone is a graduate of North Babylon High School and he earned a BA degree at Queens College in 1991. Enlisting in the US Army in 1992, Supervisor Bellone served as a Communications Specialist stationed at Fort Leonard Wood, Missouri. During his service in the Army, he was awarded commendations for meritorious service and earned a Masters Degree in Public Administration by attending night classes at Webster University. Supervisor Bellone earned his Law degree from Fordham University and was admitted to the New York Bar in 1999. Supervisor Bellone also became a USGBC LEED Accredited Professional in 2009.

As Babylon Town Supervisor, Steve has received numerous awards for his leadership. In 2009, he was named “Environmentalist of the Year” by the Sierra Club on Long Island and Government Official of the Year by the USGBC LI Chaper. Babylon was also selected as one of 15 international cities – a list that includes New York, London, Copenhagen, San Fransisco and Vancouver – to participate in the Carbon War Room. In 2010, Supervisor Bellone was named “Government Official of the Year” by the Association for a Better Long Island, one of the region’s largest business groups. That same year, Babylon was the recipient of a NYS Department of Environmental Conservation Environmental Excellence Award.

Supervisor Bellone is currently serving his fourth term as Town Supervisor. He resides in West Babylon with his wife, Tracey and their two daughters, Katherine Ann and Mollie Elizabeth.