Andrew Cuomo expected to seek ban on legislators’ outside incomes 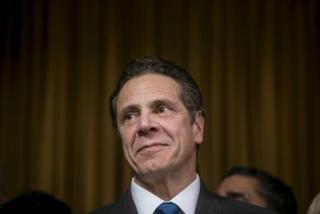 ALBANY — Lawmakers expect Gov. Andrew M. Cuomo to propose a ban on state legislators’ outside incomes when he delivers his annual State of the State speech, sources said Tuesday.
Cuomo has promised to unveil a series of ethics proposals in his address, which comes just weeks after the two former leaders of the Legislature were convicted on bribery and extortion charges.

“We were told he’ll be proposing a ban on outside income and that his tone would be somewhat harsh toward the Legislature,” said one source who asked not to be identified because the speech hadn’t been delivered yet.
Cuomo, a Democrat in his sixth year in office, is slated to deliver his address, marking the ceremonial start of the 2016 legislative session, just after 1 p.m. Wednesday. He is expected to unveil a roughly $150 billion spending plan for the 2016-17 fiscal year while proposing another $100 billion in future infrastructure projects.
Cuomo has spent the weeklong run-up to the address rolling out large-scale construction proposals, such as adding a third Long Island Rail Road track that runs to Hicksville; expanding the Javits Center for more convention space and overhauling Penn Station in Manhattan, and spending $22 billion on upstate roads and bridges.

He also signaled he’ll unveil proposals to boost the state’s minimum wage to $15 per hour in staggered steps over about six years, address homelessness in New York City, double the money earmarked for environmental protection projects and expand broadband access to the Internet.
But one area he didn’t address in the rollout: ethics.
Critics have pushed Cuomo and legislators to act in the wake of the corruption convictions of ex-Assembly Speaker Sheldon Silver and ex-Senate Majority Leader Dean Skelos.
Several lawmakers said they were told Cuomo would push for a ban on outside incomes. Legislators are considered part-time and are allowed to hold other jobs — though the majority don’t.
Assembly Speaker Carl Heastie (D-Bronx), who succeeded Silver, said Cuomo will weave anti-corruption proposals into his spending plan, which gives the governor greater negotiating leverage.

Asked Monday if Cuomo would propose an outside income ban, Heastie said only: “He could.”

Last year, the governor proposed a cap on state legislators’ incomes and offered a raise for those who chose to forgo outside pay. The governor, who in his first term signed a book deal worth at least $700,000, didn’t include himself and other statewide officials in the proposed cap. The initiative died in the Legislature.