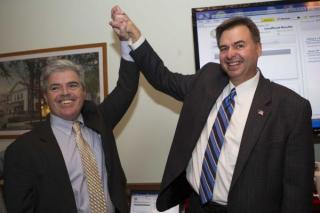 After breakfast, he drove around town picking up campaign signs.

Krupski became the first Southold Town resident ever elected to the county legislature, and only the second Democrat elected in the district, which covers the North Fork and the northeastern part of Brookhaven Town.

Krupski, 52, of Cutchogue, who has served on the Southold Town board since 2005, defeated Riverhead Town Supervisor Sean Walter by better than a 2-1 ratio. The unofficial count was 6,561 to 3,182. He beat Walter in 19 of 22 of Riverhead's election districts.

Krupski said Wednesday he isn't sure why the election turned out so well for him. "I think it was my message," he said. "When I was first asked to run, I tried to figure out the district and what was important to people."

His answers: land preservation, environmental protection and controlling the size and cost of government.

Coming from a farming family and dealing with planning and zoning issues on the town board in rural Southold helped, Krupski said. "The first district is different . . . It's all about planning for the future, your zoning and the size of government, how young people can stay and people on fixed income . . . If you keep down the size of government, that can happen."

In his concession speech, Walter called the loss "a stunning defeat . . . We did everything possible to win this race."

Walter's supporters said Riverhead's voters wanted to keep him on the job, because he has reversed decades of stagnation and revived the town economy. Critics said his battles with town board members and his sometimes-short temper worked against him.

Krupski spent about $50,000 on the campaign, while Walter raised and spent about half of that amount.

The vote increases the Democratic majority in the legislature to 13-5. But in Southold, political affiliation rarely has been an issue. On a town board that historically has a Republican majority, Krupski was picked by GOP Supervisor Scott Russell to be his deputy supervisor.

Replacing him as deputy supervisor will be more important than filling the vacant seat, according to Russell. "There's a lot of work to do," he said.

Southold has six members on its town board, and if the seat remains vacant, there will be no possibility of a tie vote.

Russell said he plans to consult with the rest of the town board before making any decision on naming a replacement for Krupski, whose term would have ended on Dec. 31.