370,000-plus LIers could be affected by GOP health bills 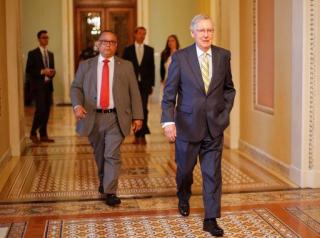 Almost 370,000 Long Islanders could see their access to health coverage directly affected by the possible repeal and replacement of the 2010 Affordable Care Act, known popularly as Obamacare.

In Nassau County, 162,079 people and in Suffolk County, 207,659 people, were covered by insurance obtained through the state’s ACA insurance exchange, NY State of Health, as of January 2017, according to the state Department of Health. While not all those insured on the exchange received subsidies or tax credits under Obamacare, most were in Medicaid or in plans that were funded or subsidized with money that faces cuts under GOP proposals.

In addition, 24,433 children in Nassau and 32,678 in Suffolk receive coverage on the exchange through Child Health Plus, funded under a program distinct from the ACA that will expire on Sept. 30 unless Congress extends it.

The Republican-controlled U.S. Senate will attempt to overcome deep divisions in its own GOP ranks to vote next week on a new health care proposal to topple the ACA and its exchanges. If successful, it would have to be reconciled with a bill passed May 4 by the House of Representatives before going on to the desk of President Donald Trump to be signed into law.

Senate Majority Leader Mitch McConnell (R-Ky.) said he may be forced to negotiate with Senate Democrats on funding to stabilize Obamacare insurance markets if his latest bill fails to win the 50 Republican votes it needs to pass.

When children in the Child Health Plus program are included, 186,512 people in Nassau County were enrolled in plans through the exchange as of January 2017. Those include 101,564 covered through Medicaid managed care plans, 38,079 in the Essential Plan, a low-cost plan that covers adults with incomes up to 200 percent of the federal poverty level of $16,105, and 22,436 in qualified health insurance plans. In addition, 24,433 received coverage through Child Health Plus, which is obtainable through the exchange but is funded under an act separate from the ACA. Statewide, 59 percent of qualified plan policyholders get some form of subsidy, tax credits or cost reduction.

Long Islanders accounted for 19 percent of CHP enrollees in the state, 12 percent of Essential Plan enrollees and 19 percent of those enrolled in qualified plans. Statewide, 678,000 disabled children and adults rely on Medicaid, as do 48,300 elderly in nursing homes.

“Both the Senate bill and the House bill reflect a heartless cut to healthcare that would have a dire impact in NY,” it said. “The reduction in federal tax credits would force tens of thousands of New Yorkers to pay more for less health care coverage. In particular, the Senate Bill would eliminate tax credits for at least 15,000 New Yorkers and significantly reduce the amount of tax credits for those who would still be eligible. Additionally, both bills would reduce the federal funding for the Essential Plan, putting coverage for over 665,000 New Yorkers in jeopardy.”

The Congressional Budget Office, which scores proposed legislation, said the House bill and the initial Senate GOP proposal would result in more than 20 million fewer people with health coverage by 2026, including many now covered by the ACA Medicaid expansion for which the GOP wants to roll back funding. Republican leadership also wants to limit federal reimbursements for states’ costs for Medicaid overall, which covers the poor, disabled and seniors in nursing homes, as well as plans for adults above the poverty line. According to the CBO, projected contributions to the states would be slashed by 35 percent by 2036.

Under the ACA, the federal government pays for most of the costs of adding adults earning up to 138 percent of poverty level in the 31 states, including Washington, D.C., that opted to expand Medicaid. States could continue to cover those adults under GOP plans but federal contributions would drop almost by half and fall under the GOP plan for a per capita formula for state funding, rather than the open-ended reimbursement of a share of state costs now in place.

According to the health department, children enrolled in CHP, which is authorized under the Children’s Health Insurance Program, could lose coverage unless Congress reauthorizes the program by Sept. 30. Congress extended it for two years when it was last due to expire in 2015.

Democrats in Congress want to fix problems with the ACA rather than replace the plan. Republicans, who have called for its repeal for the past seven years, say insurers are pulling out of many counties — most of them in Republican-led states that didn’t opt to expand Medicaid coverage — while costs have risen sharply for many unsubsidized policyholders due to rising premiums and deductibles.

GOP proposals could eliminate the widely disliked mandate to buy coverage, and lower premium costs for younger, healthier people while raising them for people who are older and sicker. The latest GOP proposal would allow insurers to offer skimpier, lower-cost plans attractive to healthy people, which could force comprehensive plans to hike premiums to care for the sicker patients left in their pool.

Many Republican senators are pessimistic about the possibility of passing new legislation because of the deep divisions in their ranks between conservatives who dislike subsidies and tax credits, and moderates who fear the consequences of cutting Medicaid and rising costs for those with pre-existing conditions.

In a change from the previous version, the new Senate bill would add $70 billion to a $112 billion fund for states to use to bring down costs for lower-income families, and send $45 billion in grants to states to deal with opioid addiction. But critics say the added funds are insufficient and that allowing insurers to siphon off healthy policyholders would destabilize the market for individuals.

Dr. Charles Rothberg, president of the Medical Society of the State of New York and an ophthalmologist at Brookhaven Hospital, said views were divided in the medical community as well over the fate of the ACA. A survey sent to leaders in the organization found a 50-50 split between those who favored and opposed repeal, he said.

However, he noted, “I asked the question without specifying about provisions. Then I asked what they thought of the House bill and only twenty percent supported it. They didn’t like the idea of people getting thrown off insurance rolls and New York State getting a $3 billion budget hole.”

Those who oppose the ACA, he said, felt it contributed to regulatory burdens that impeded their clinical practice.

However, in a Medical Society statement, he said, “While a wholesale review of the flaws of the ACA should be undertaken, we are deeply concerned about potentially significant adverse consequences to New York’s residents and its health care system arising from proposals before the House and Senate.”

“I think New York and Long Island have the potential to be devastated,” he said in an interview. “The way our health care funding is organized, we maximize the funding from the ACA. (Without it) policy holders would be impacted because our infrastructure is partially paid for by Medicaid payments and if those are cut the losses will have to be made up elsewhere — including from people not covered by Medicaid.”