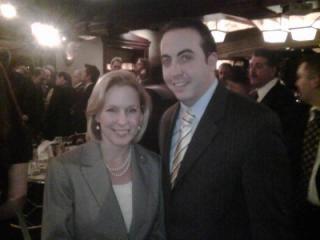 The Dujmic campaign received a major boost late yesterday when it received the endorsement of United States Senator Kirsten Gillibrand.

Senator Gillibrand announced: “Joe Dujmic is the right choice to fight for Long Island’s hard-working families and taxpayers. I wholeheartedly endorse him.”

Kirsten Gillibrand is the junior United States Senator from the State of New York and an attorney. Prior to serving New York State as its Senator, Ms. Gillibrand was twice elected to the United States House of Representatives, from New York’s 20th congressional district.

Some of Senator Gillibrand’s legislative victories include the repeal of Don’t Ask, Don’t Tell the policy that banned gays from serving openly in the military and the passage of the James Zadroga 9/11 Health and Compensation Act which provides health care and compensation to the 9/11 first responders and community survivors that are sick with diseases caused by toxins at Ground Zero.

“I would like to thank Senator Gillibrand not only for her support of my candidacy, but also for providing those who aspire to public service with a role model we can be proud of. I look forward to working with Senator Gillibrand once I am elected to help meet the needs of all Long Islanders,” said Dujmic.

Joe Dujmic, a Suffolk Democrat, is running for State Assembly in the 10th district.