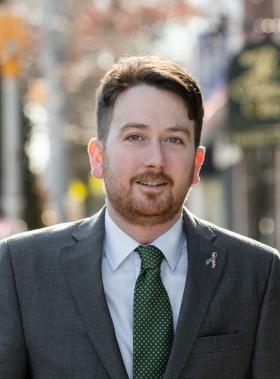 Tom Murray grew up in Sayville, New York, a hamlet on the South Shore of Long Island in Suffolk County. As a kid growing up in a small town along the Great South Bay, Tom developed an early appreciation of what it means to have a strong sense of community. Even before he graduated from Sayville High School, where he was student body president, he knew he would come back after college to raise his family with those same small town values.
Tom attended the University of Richmond in Virginia as an undergraduate and later, a law student and was admitted to the New York Bar Association in 2014. He practices environmental law. He and his wife Caite, whom he met in college, lived in the Bronx for several years before realizing their dream to buy their first house in 2017 on the South Shore just a few miles from where his dad grew up.
No sooner did Tom and Caite unpack the furniture in their new Bayport home, than Tom set out to get involved. He joined the Sayville Civic Association, spoke out at Town Board and Zoning Board meetings, and fought over development at Island Hills. He took a stand on projects like a proposed slaughter house in Islip and a Dunkin Donuts that would cause traffic nightmares in Bayport, projects that would hurt his hometown. Wanting to have a hand in making things better, Tom ran for New York State Assembly in 2018 for the 7th AD, making a strong showing in his first bid for public office.
Tom and Caite recently welcomed their first child, Beatrix. Now more than ever, Tom is focused on policies that will protect and preserve his hometown for future generations. As Town Supervisor his will open up town government. He’ll create opportunities for all residents to speak out about issues that impact their lives. And unlike the current Town Board, he will not accept campaign contributions from any company that does business with the town.
Long term, Tom is convinced the town must move toward a greener future as other towns have already done. For example, converting the town fleet to electric vehicles with the help of state and federal funding will reduce fuel costs as well as pollution. Tom knows that future super storms like Sandy could cause tremendous destruction in a coastal town like Islip, and so he is committed to protecting the thousands of homes and businesses in low lying areas of the town through projects specifically designed to build a more resilient coastline.
Tom is looking to the future, not its past. As supervisor, he will fight for the future of Islip. As he says, “I have no choice. It is the future of my own family as well as the thousands of other families who live here. Our kids and grandkids deserve a future as safe and solid as the childhood I was privileged to enjoy here in our town.”