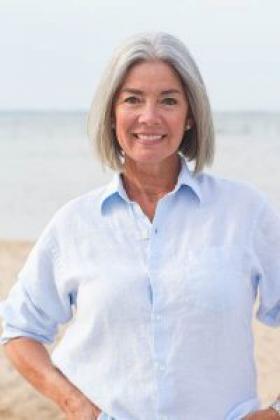 Susan has spent most of her life on the East End, moving to East Hampton almost 40 years ago with her husband to make East Hampton a home and raise their son. Susan acquired an active relationship with and knowledge of the outdoors and environmental concerns having spent summers in Maine as a youth. Since moving to East Hampton she has come to appreciate our harbors, bays and beaches and the need to protect the wildlife habitats those areas include. She has been supportive of the Town’s Zoning and Planning efforts from the days when Judith Hope and Tony Bullock were Supervisors and believes it is of upmost importance for the Town to preserve its clean drinking water and to transition from fossil fuel dependency to renewable energy resources.

Susan’s love of the ocean and the water surrounding spurred her to become a certified scuba rescue diver and underwater first responder. She has also worked to give back to her community visiting patients in hospitals and nursing homes in her spare time.

Susan has been actively involved in the Accabonac Protection Committee, Surf Rider Foundation, Concerned Citizens of Montauk, East Hampton Trails Preservation Society, and the Northwest Alliance.
She raised her son, Walker, in East Hampton, who is now attending law school, to be equally concerned about the protection of our environment in East Hampton. Susan has worked for the last 22 years in the real estate industry in East Hampton and is familiar with its neighborhoods and the natural beauty that makes them so desirable for year-round residents as well as our second homeowners.

Susan is an accomplished writer and illustrator and looks forward to using the full panoply of her skills in working as a trustee to protect our wetlands, waterways and trails. Susan lives in Northwest Wood with her husband Paul.