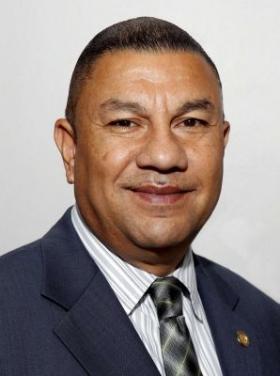 Philip Ramos represents the 6th Assembly District, which includes portions of the hamlets of Brentwood, Baywood, Central Islip, Bay Shore, North Bay Shore, Islip and Islandia. He was elected to a newly created Assembly seat in 2002.

Phil Ramos was born in the Bronx. The son of a correction officer and a registered nurse, Phil learned at an early age the value of helping people and being dedicated to your community. His family was one of the first Hispanic families to move to Brentwood in 1957. He has lived in the community for the past 50 years, raising his two children and working tirelessly on behalf of the community.

Phil graduated from Brentwood High School in 1974, and went to work as a therapy aide at the Pilgrim Psychiatric Center where he helped organize self-help groups for patients. Phil later became an Emergency Medical Technician and received a commendation for delivering a baby boy on the side of the Southern State Parkway.

Phil recently retired from the Suffolk County Police Department, after 20 years of dedicated service. He rose through the ranks of the department – retiring as a Detective.

Phil Ramos began his career in 1979. He followed in the footsteps of his father by going into law enforcement where he not only helped protect people from crime, but also worked to make the community better. As a Suffolk County Police Officer, Phil used his position to help bridge the gap between the Latino community and law enforcement. He organized meetings with Latino merchants and precinct commanders to solve problems in the community. He also joined with other Latino police officers in founding the Suffolk County Police Hispanic Society to help address Latino issues in the community.

In the Police Department, Phil worked eight years in the Narcotics Unit as an undercover officer. He witnessed firsthand the devastating impact of drugs on the community, and used this experience to help teach parents how to discuss the effects of drugs with their children. Phil has also lectured at schools on the issue of police relations and minority youths.

Promoted to Detective in 1987, Phil was assigned to the community where he grew up. He helped solve several major crimes – including the brutal assault of two day-laborers in Farmingville.

He understands the value of being a positive role model, and he’s consistently worked to fulfill that obligation. In 1993, he was elected president of the Suffolk County Police Hispanic Society and helped resolve problems between Brentwood soccer leagues and officials. In addition, Phil worked with the Long Island Guardians to create a mentoring program for Latino Police Officers to serve as role models for Latino and African-American children.