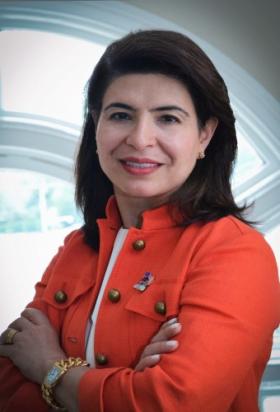 Like millions of Americans before and since, Anna Monahemi Kaplan left the land of her birth, Iran, as a child refugee to escape revolution and the threat of persecution. Separated from her family for more than a year, Anna lived in Brooklyn and with a foster family in Chicago before her parents, her brothers and she were reunited and settled in Jamaica, Queens.

Anna attended the Stern College for Women and graduated from the Benjamin Cardozo School of Law. Anna became a citizen in 1995. For more than 21 years, she and her husband have lived and raised two daughters in Great Neck, in the Town of North Hempstead.

Beginning with the Parent-Teacher Association, Anna has shown her commitment to serving her community, first by being elected to the Board of Trustees of the Great Neck Public Library District—where she went on to serve as Vice President—and then accepting an appointment to the Town of North Hempstead Board of Zoning Appeals, before being elected to the Town Council in 2011.

“Persian Jews stayed out of politics in Iran,” said Anna. “My parents and community were afraid of being noticed—they were a small, vulnerable minority in a conservative part of a conservative country. But here in the United States, we have been given so much opportunity and I am so grateful to this country for opening its arms that I’ve had to give back.”

As a town councilwoman, Anna represents more than 40,000 residents of unincorporated Manhasset and Great Neck as well as the villages of Great Neck, Kensington, Kings Point, North Hills, Roslyn, Roslyn Estates and Thomaston. Known as a detail-oriented and hardworking advocate for her constituents, Anna takes pride in having secured increased state funding for an even better Manhasset Valley Park, leading the way on repaving Plandome Road to improve safety, business access and commuting times and sponsoring legislation to ban electronic cigarettes from our parks and playgrounds. Anna takes the job of serving her district seriously and has never missed a council meeting.

Anna has been honored for her service to the community by the Nassau County Legislature, the Nassau County Comptroller’s Office and the Town of North Hempstead. In 2010, she was recognized as a Woman of Distinction by former New York State Senator Craig Johnston. Following her historic election as the first ever Iranian-American elected to town office in New York, Anna was profiled by Lifetime Networks as part of their “Remarkable Women” Campaign and spotlighted in Senator Kirsten Gillibrand’s (D-NY) “Off the Sidelines” call to action for women to make their voices heard. She is fluent in Farsi and Aramaic.