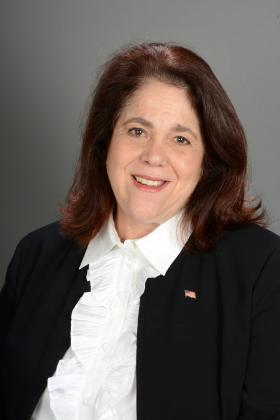 Angela De Vito was born in NYC and moved to Rocky Point, specifically the North Shore Beach Community, in 1950. She has lived in a variety of communities throughout the United States, including Chicago, Salt Lake City, Cleveland, Albany, Boston, and Fort Belknap; in 2000 she relocated from Mattituck to South Jamesport.

Ms. De Vito attended the University of Chicago. It was there she first got het feet wet with public service, helping to organize a college bound student mentor program in cooperation with the leadership of Chicago’s notorious south side Black Stone Rangers’ gang. She is a graduate of Columbia University with a degree in anthropology; a master of science in public health was earned at the University of Utah Rocky Mountain Center for Occupational and Environmental Health. Her master’s thesis examined the genetic changes experienced by workers exposed to ethylene oxide and the effects of such exposure on their health; it was incorporated into the OSHA standard for ethylene oxide.

While living and studying in Utah, Angela worked as the Technical Director for the University’s Division of Pulmonary Diseases., supervising a staff of 22. Her work included creating on-site clinics in Utah’s coal country, bringing much needed public health services to scattered and distant communities. Angela distinguished herself by sponsoring the very first CETA program at University of Utah Hospital, providing training and guidance to the unemployed.

In the 1980’s Angela returned to New York State, this time to work for AFSCME, then the Public Employees Federation as Director of Health and Safety. Her work during this decade is distinguished by several accomplishments: the creation of a state-wide system of occupational medicine clinics; the passage of asbestos protection laws; the structuring of a citation clearing house for the NY State’s Public Employees Safety and Health Administration ; the implementation of the first educational programs for workers exposed to bloodborne pathogens in the State’s correctional facilities; public testimony of a variety of safety and health issues at the State and Federal levels; the training of 4500 workers in health and safety hazard recognition and resolution; and serving as a technical advisor to the Governor’s Task Force for the clean-up of the PCB contaminated State Office Building at Binghamton. Angela also found time to serve as an adjunct professor for the Cornell Extension Labor Studies Program.

Angela came home to Long Island in 1989 to assist with the set-up of the NYSDOH occupational medicine program at SUNY Stony Brook, working there until her retirement in 2000. Never one to side idly, she immediately began to work with the Building and Construction Trades Council of Nassau and Suffolk Counties; her task was to help transition the unemployed, the formerly incarcerated, the displaced workers, at-risk youth and women into careers with the trades. Angela partnered with the Suffolk County Correctional Facility in 2004 and created an on-site trades training program, one of the first of its kind in the nation. In 2009, this program, called Built-on-Pride, expanded to and partnered with the Nassau County District Attorney’s office, bringing the same services to the formerly incarcerated.

As a Riverhead resident for the past 14 years, Angela has been active in her community. She has served as president and corresponding secretary of her civic association; member of the Town Industrial Development Agency; member of the Town Handicapped Committee; and member of the Town Animal Shelter Advisory Committee. Angela also was elected for 2 terms to the Board of Education.

“Local government is the greatest opportunity we have for participatory democracy. We must respect the opinions of all our citizens, listening to and soliciting their ideas in an environment that is free of hostility, nepotism, and politics. It is my hope to bring respect, professionalism, and good government to all residents of our great town.”