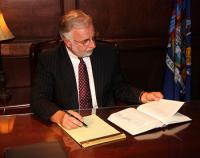 I have a strong record of fighting for Long Island families affected by helicopter noise. Together with Senator Chuck Schumer, I led the initiative directing the FAA to create the North Shore route that requires pilots to remain a mile offshore and has given relief to many Long Islanders, and I have repeatedly pressed the FAA to add a South Shore route. I will continue to work to extend the route past Orient Point and protect the quality of life on Long Island's East End.

I am committed to rebuilding our communities after Superstorm Sandy.

I saw firsthand the damage and devastation from Superstorm Sandy. And as a lifelong native of Long Island, I was proud to be able to do something about it. I worked tirelessly with Democratic and Republican members of Congress to pass $60 billion in disaster relief. I continue working with federal, state and local officials to rebuild our coastline and protect Long Island from future storms

Investments in Long Island Infrastructure are vital to our future.

As the ranking member of the Water Resources and Environment Subcommittee, I was an author of the bipartisan Water Resources Reform and Development Act that secured millions in federal funding for Suffolk County’s beaches, harbors and waterways and promotes Long Island’s competitiveness, prosperity, and economic growth. The investment in our community will create hundreds of jobs and protect our home from future environmental disasters.