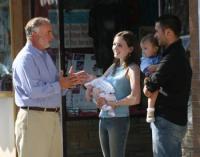 We need to lower the tax burden on middle-class families.

A strong middle class is vital to grow the Long Island economy. That’s why I voted to extend income tax cuts for middle-class families, voted for the payroll tax cut, and voted to repeal the marriage penalty and veterans tax on retirement pay and disability benefits.

We need to close tax loopholes for big corporations that outsource American jobs.

I will always fight to protect good-paying middle-class jobs so vital to the Long Island economy. I wrote the Outsourcing Accountability Act to prohibit taxpayer dollars from being used to train foreign workers, and eliminate tax breaks for big corporations that outsource jobs overseas. And I successfully fought to include “Buy America” requirements in infrastructure projects so that more of our nation’s infrastructure is made in America, by Americans.

Pay equity is not just a women’s issue, it’s an economic issue. I voted for the Lily Ledbetter Fair Pay Act prohibiting pay discrimination based on gender. I am also a cosponsor of the Paycheck Fairness Act that would strengthen equal pay laws and close loopholes allowing employers to avoid responsibility for discriminatory pay.

I believe education is the key to laying the foundation for the middle class and for Long Island’s future.

That’s why I’ve spent a lifetime working to improve access to affordable education. I wrote the bipartisan College Cost Reduction Act that funded the single largest investment in student financial aid since the 1944 GI Bill and is helping countless middle-class families send their kids to college. I am unwavering in my support for student aid programs, such as Pell Grants that provide access to higher education to students from low-income and minority backgrounds. As your Representative, I will continue to fight for the needs of students and their parents.

Federal unemployment insurance is a vital program that keeps middle-class Long Islanders from falling into poverty.

It is crucial that we protect Long Islanders who lost jobs through no fault of their own with the relief they deserve as they get back on their feet and look for new employment. I will continue to lead the fight to restore these benefits.