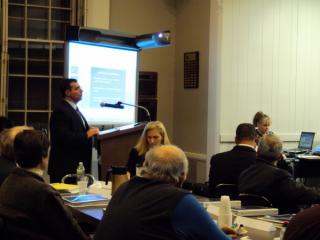 The leader of the Islip Town Democratic Committee says his group plans to examine "from top to bottom" the town's recently approved 2013 operating budget, which includes a 28-percent property tax increase and employee layoffs.

Gerry Pallotta, president of the committee, called the tax increase, which passed unanimously last week, "unprecedented," and said town taxpayers deserve a full accounting of what the Republican and Conservative party-dominated board cut from the budget.

"It shakes the trust of the taxpayers," Pallotta said.

At least 22 full-time employees are scheduled to lose their jobs, and at least another couple of dozen part-time guards at the town's marinas will be out of work, town officials have said, adding that they still are finalizing the details. The job cuts, which will coincide with fee increases for a host of recreational activities, sought to soften a 65 percent tax increase Supervisor Tom Croci proposed in September.

After residents reacted negatively during a series of public hearings, Croci and the town board tweaked the budget. They ultimately passed the 28-percent increase to the town portion of the tax bill; Islip Town taxes account for 4 percent of the average resident's total tax bill.

Croci, who campaigned last year on a promise to lower taxes, expressed regret for the tax rise, but blamed the former Democratic administration for leaving the town with a $26 million budget deficit. Croci has argued the tax increase was needed in order to avoid deep cuts to services.

"We will rebuild the town and put us in better fiscal health," said Croci, a Republican.

Republican Committee chairman Frank Tantone called the increase "necessary to keep the residents at the level of service they deserve."

"You're forcing the community -- those of us on a restricted income -- to leave," said Jacobs, 60. He asked the board whether it could promise not to implement another tax hike next year.

"Can we promise that?" said Councilman Anthony S. Senft Jr., a Conservative. "Of course not."