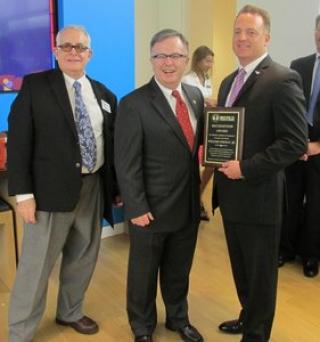 Huntington Station, NY - July 3rd, 2013 - On Thursday June 27th Bill Lindsay III, who is running for Suffolk County Legislature in the 8th District, was honored by Deputy Presiding Officer Wayne Horsley and members of the Melville Chamber of Commerce in the Microsoft Store at the Walt Whitman Mall for his years of service as a member and as Vice President of the Chamber.

Horsley, who chairs Suffolk’s Economic Development and Energy Committee, commented on Bill Lindsay III as he stepped down as Vice President of the Chamber. “Bill Lindsay has advocated on behalf of businesses promoting economic development for many years. He realizes a strong sense of community benefits the individual, as well as the greater society. I applaud him for his commitment and dedication to business members and his tireless dedication to society,” said Horsley.

The Melville-East Farmingdale Chamber of Commerce was established in 2002 and is currently operating under the DBA Melville Chamber of Commerce. With a mission to promote economic growth and business development throughout Suffolk County the Chamber has acted as a breeding ground for businesses, both big and small.

"Bill Lindsay is a remarkably unselfish leader who has quietly made significant improvements to the lives of his fellow Long Islanders,” remarked Michael DeLuise, President of the Chamber. “Throughout his years of volunteer service as a senior board member of the Melville Chamber of Commerce his insight and leadership added significant benefits to our community. We can thank Bill for his hands on involvement in traffic reduction, advances in public transportation and quality of life improvements,"

After receiving the award of recognition, Bill Lindsay thanked Deputy Presiding Officer Horsley, his colleagues, and friends for their many years of working together. “Over the past seven years I have learned that for businesses to thrive in Suffolk County we must take the necessary steps to streamline government so that our small businesses have sustainable and substantial growth,” Lindsay stated. “I have a young daughter and son at home, and I want them to have every opportunity available to them. I know that for future generations to succeed we must find new and exciting ways to attract young people to Suffolk County.”

Lindsay, who has been Vice President of the Chamber since 2007, is a father, a businessman, and a graduate of St. Joseph’s College, who currently resides in Bohemia. Lindsay’s experience working in the private sector at Government Employers Insurance Company and as Vice President for Hilb, Regal and Hamilton (HRH) will prove invaluable in cutting the red tape that is hindering job creation and economic growth within Suffolk County.