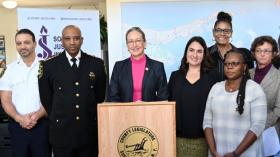 A new clothing drive is seeking donations to provide inmates leaving the Suffolk County prison system with dress attire so they can pursue career and educational goals.

Suffolk law enforcement and local nonprofit officials gathered Wednesday at Legis. Bridget Fleming’s (D-Sag Harbor) office on the East End to help announce the launch of the clothing drive, spearheaded by Suffolk County Sheriff Errol Toulon’s office through its Sheriff’s Transition and Re-entry Team, or START, Program. The program, which began in February 2020, is partnering with the Brentwood-based New Hour for Women and Children-LI and the Riverhead-based Sound Justice Initiative for the clothing drive. 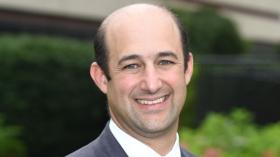 Robert T. Calarco has emerged as a leader with a solid record since his first election to the seat a decade ago.

Seeking a sixth and final term, Calarco, 42, of Patchogue, says his top district priority is the sewer project to connect 500 homes in south Patchogue. He vows to assist the county's effort to acquire and preserve part of the Avery Homestead in partnership with Brookhaven Town and continue striving to improve housing and public safety in Gordon Heights.

As presiding officer in the Democratic majority, Calarco is committed to following through on plans for police procedural reforms and fair redistricting, and making certain that opioid settlement funds are used, as intended, to fight addiction.

Republican Dominick S. Thorne, 54, of Patchogue, shows a devotion to policing and local emergency services, with which he's a longtime volunteer. But he lacks the incumbent's versatility on government issues. 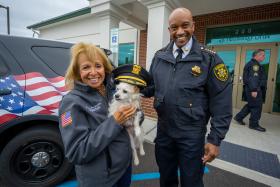 Jason A. Richberg has hit the ground running in his time in the legislature.

The 39-year-old West Babylon Democrat took office in a 2020 special election to replace the departing DuWayne Gregory, but Richberg had already served in various aide roles in the same body, experience that is paying off now. Richberg knows the importance of expanding access to sewers in his southwest Suffolk district, creating a better and fairer housing system, and improving the relationship between police and those they serve. Thoughtfully and forcefully, he is emerging as a powerful voice attacking the ills of racial discrimination in Suffolk. That includes legislation to help homeowners remove offensive — and unenforceable — restrictive racial covenants from deeds.

Opponent Jarod B. Morris, 23, of Wyandanch, told Newsday he supports community policing and attracting business to Long Island but he is not actively campaigning, according to the Suffolk GOP.

Democrat Susan A. Berland, seeking a third term, tries to avoid predictable bromides and takes clear positions on what she sees as the merits of issues.

Berland, 60, of Dix Hills, says when asked, without waffling, that she'd favor a county COVID-19 vaccine mandate for county police officers. She acknowledges the inevitability of a cannabis trade but speaks out against recreational drug use.

Even with important budgetary and development issues looming, often a county legislator's top job is to support and serve his constituents. And that's a task Deer Park Democrat Thomas P. Donnelly fully embraces.

Donnelly, 55, now completing his second term, said he sees his responsibilities through a "pragmatic" lens, with attention to public safety, quality of life and other resident concerns. Donnelly lauds the progress at Wyandanch Rising and said he supports further development in his district as long as there's community buy-in.

Stephen C. Becker, 40, an HVAC sales manager, said he'd use his business sense to address the county's fiscal stresses. But Becker, a Republican from Dix Hills, lacked specifics when promising to rid Suffolk of the familiar waste, fraud and abuse. And his thinking on housing and development is limited to supporting the construction of single-family homes and criticizing efforts like Wyandanch Rising.