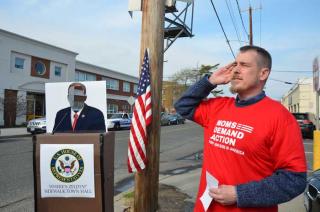 Since being sworn in for a second term in January, Congressman Lee Zeldin has faced mounting pressure to hold a town hall meeting for constituents in New York’s First District. Winter temperatures did not stop protesters, sometimes a dozen or so and sometimes nearing 200, from calling on their congressman to hold a town hall.

These rallies, organized by the creators of the Let’s Visit Lee Zeldin Facebook page, were meant to bring attention to Zeldin’s refusal to hold a town hall. A canceled meeting scheduled for April at the Rogers Memorial Library in Southampton only fueled their fire. “Unfortunately, this meeting was co-opted, renamed and rebranded by a group of liberal obstructionists, who were already holding strategy meetings to turn it into a disruptive show for their own political theater,” said Zeldin spokesperson Jennifer DiSiena. A tele-town hall, Facebook Live session and two mobile office hour dates followed, but still no word of a town hall.

So last week, Let’s Visit Lee members brought a town hall to the sidewalk across the street from his office on Oak Street in Patchogue. Nearly 50 people gathered to listen to constituents ask questions to an absent congressman — a cardboard podium with photo of Zeldin posed behind it with his face cut out.

Several constituents approached the faux-Zeldin, asking questions on issues that ranged from gun control to women’s health to climate change and immigration reform. “Congressman Zeldin, hear our voices!” they chanted after each person spoke. “There won’t be any questions unless Lee Zeldin attends,” said Amy Turner, retired teacher and attorney from Wainscott, of the symbolic prop. “An actual, real town hall is so important so that constituents get to hear each other’s concerns,” she said. “We hear concerns on a national level, but it’s important to hear what your neighbors in this district are concerned about.”

If First District constituents are anything, it’s persistent.

Late Thursday night, the congressman’s office announced that several “community forum” events would be held over the weekend. At the first of three meetings on Sunday, April 23, over 200 NY-1 constituents gathered at Suffolk County Community College Riverhead Campus for the first “town hall” meeting held by Congressman Zeldin. Later that day, he held two more town halls across the First Congressional District, at the Portuguese American Center in Farmingville and St. Patrick’s Church in Smithtown.

Suffolk County Comptroller and Republican John Kennedy moderated the event in Riverhead, struggling to control the crowd from the very beginning. The event began promptly at 2 p.m. and the lights were dimmed to hear Zeldin’s about-five-minute opening remarks. Immediately, the crowd began to stir, calling for questions to be answered and the lights to be turned on.

“We will try to cover as much as we can in the one hour,” said Kennedy.

People from the crowd began to yell out: “You’re stalling,” “We only have an hour,” “We can’t see his face” and “Turn on the lights.” Zeldin responded to the crowd. “If I can have four minutes to share some of my thoughts, I would appreciate it,” he said.

He also addressed the crowd saying he knows that the purpose of some of the attendees was to disrupt the meeting and that he felt sorry for those who attended for the right reasons. The crowd persisted until he began to answer their questions.

He was first asked if he supports President Donald Trump’s plan to build a wall.

“As far as our border goes, we have a 9,000-foot wall in Arizona called the Wauchula Mountains. In Texas, there is already a border — water. There are areas with physical barriers between our countries and there are areas that have vulnerability,” he said. “I don’t believe that we should have a 30-foot wall over the top of the mountains. But this isn’t just about people, it’s also about narcotics and what is entering our country. Part of coming negations in [Washington] will include what to do with our borders.”

Despite a bit of back and forth, Zeldin said, “It was such a pleasure to meet with so many great constituents at today’s town halls to hear concerns and answer questions. At the community forums, we were able to cover a breadth of very important issues.”

He then reminded the community that he is willing to work with anyone to move the country forward no matter their ideological background, as long as it is engaging in substantive and productive dialogue.

After Sunday’s event, Turner told the Advance that she didn’t know quite how to feel. “[Kennedy] did a good job, but this was not a true town hall,” she said. “In the end, it was just another opportunity for Zeldin to give a monologue. His constituents want a dialogue,” she added.

John Whitford, 27, of Centereach also had mixed feelings. “To some level, it was productive. We were able to open up a dialogue with him, and I know a lot of people have been wanting to do that,” he said. “But in some ways, it turned into people in the crowd just yelling at him.”

Whitford said that he thought Zeldin’s answers were strongest on the environment, Trump releasing his tax information and probes into Russian hacking. “He wasn’t giving answers that they wanted to hear,” Whitford said, noting that the majority of the crowd disagrees with most of his policies anyway. “There were some pro-Trump and pro-Zeldin people in the crowd, but they were quiet for the most part. They were a minority, but they were there.”