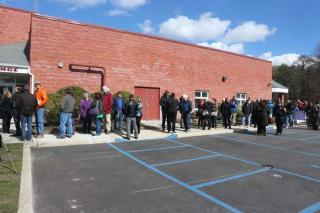 It wasn’t a town hall meeting. But it was something.

Upon checking in, each constituent was asked to fill out a constituent comment form, briefly summarizing what their main concerns were. At the bottom appeared a disclaimer, warning that meetings with the congressman would be no longer than 10 minutes. “We’re going to try and get everyone in and out,” said staffer Belinda Groneman, explaining how the day would go.

Groneman added that the staff would skim through the comment forms and attempt to form groups of people who had similar issues on their minds. Acknowledging that Zeldin would not be able to meet with everyone, Groneman explained that additional D.C. staffers were available to address hot topics, one of them being healthcare.

That’s how mobile office hours work— and they are usually rather unexciting affairs, where elected officials can address citizen concerns. The first group of about five constituents was seen just before 11 a.m.

“This is totally inefficient, said Elizabeth Parks of Setauket, explaining that a town hall-style meeting would have been better for dealing with the 200-plus people. “With all due respect, why doesn’t he just come out here and address all of us?” another constituent asked Groneman. Cheers and a brief chant of “We want Lee!” followed, but were quickly hushed.

In a previous interview with the Long Island Advance, Zeldin has cited behavior as the reason he remains opposed to holding a town hall-style meeting. “It is hard to take seriously a request for a town hall for the purpose of disrupting it,” he said, of angry constituents. “It’s hard to have a town hall without decorum, and it greatly disrespects the people who travel to the event wanting to engage in substantive questioning and answering to get an update about what is going on in Washington,” he added, explaining the need to only hold meetings with substance.

According to Zeldin’s communications director Jennifer DiSiena, Zeldin was invited to speak at a meeting hosted by Rogers Memorial Library in Southampton, which has since been canceled. The protesters, she said, renamed that event as a town hall meeting.

“Unfortunately, this meeting was co-opted, renamed and rebranded by a group of liberal obstructionists, who were already holding strategy meetings to turn it into a disruptive show for their own political theater. Many of the people at the moment requesting town halls across the country are doing so with the purpose of disrupting the town hall,” explained DiSiena. “For those who are interested in having a productive discussion on an array of issues, Congressman Zeldin and our staff are meeting with them in small groups.”

The individual meetings, she said, have proven to be more beneficial and effective. She said those meetings allow Zeldin to reach the most constituents while also engaging in constructive dialogue.

“Constructive dialogue” was key for Democrat John A. Smith, founder of Patchogue Indivisible.

Despite arriving around 9 a.m., Smith waited until midday to be seen by the congressman, joined by six other constituents. The group was originally seen by staffer Matt Scott, who handles mainly healthcare issues, but Zeldin did come in, Smith said. After shaking hands and introducing themselves, Smith stood up and said, “I like constructive dialogue, too.” The congressman smiled and they began discussing the Affordable Care Act. Unfortunately, Smith said, some of his fellow constituents, even in a small group, were not allowing Zeldin to complete his sentences. “There was a lot of interrupting,” Smith said after their closed-door meeting.

According to Smith, Zeldin did well at addressing their concerns at first. “He was good for the first five minutes, but once people started interrupting, he closed off,” Smith said. “That’s not the way to build a relationship of communication. You have to work together,” he added.

Despite the back-and-forth, Zeldin did indicate that the ACA is not the answer and that Congress was closer to a replacement plan than they were a few weeks ago. “He brought up health savings accounts,” Smith explained of the possible alternative.

Though Smith does not agree with the intricacies of HSAs, he was glad to hear the congressman’s stance directly. “We are still pushing for a town hall meeting. We’d love to sit down and continue having constructive dialogue with him,” Smith said.

Healthcare topped the long list of constituent concerns. While waiting to be called, Brian Morris of Rocky Point joked that his list of concerns was longer than the space allotted on the form. They ranged from Zeldin’s sponsorship of the Concealed Carry Reciprocity Act of 2017 to LGBT rights. “I have two nieces who are gay,” he said. “I would hate to see all the progress that’s been made for equal rights lost.”

Morris added that he would also like to get to the bottom of Russia. “Congress must stand up and do what they’re supposed to do: be a check on the presidency,” he said.

Later on Friday afternoon, Morris updated the Advance that after waiting for hours, he never got in. “I had to leave at 1 [p.m.],” he said.

Such was the case with many others as well.

Mary Dashiell Kassner of Patchogue expressed frustration that she was also never called for a meeting. “The day was not a huge success in my book,” she said. Kassner got on line outside around 10:10 that morning and was let inside the firehouse a half-hour later. “I think if we were made aware of the fact our meeting with Lee was based on how we filled out a form, it would have been more honest. I mistakenly thought that we would be called from the sign-in sheet,” she explained. She was hoping to get some clarification on where Zeldin stands on education, environmental issues and the defunding of Planned Parenthood. “I think based on the crowd I saw today, a town hall meeting would have been much more productive. All the people I saw today were polite and interested in hearing his stance on subjects. It was a very civil group,” she said.

Later, his office issued a press release stating that “hundreds of NY-1 constituents were able to meet with Congressman Zeldin or a staff member to discuss any issue, including foreign affairs, healthcare, veterans’ affairs and much more. Mobile Office Hours were originally scheduled from 10 a.m.-1 p.m., but Congressman Zeldin met with constituents continuously until the last NY-1 residents left after 6 p.m.”

On Tuesday night, Zeldin hosted a Facebook Live session from Washington, D.C., and many constituents took to their keyboards to continue to push for a town hall meeting. “This was the largest and most successful mobile office hours that the congressman has ever held,” said spokesperson Jennifer DiSiena, adding that Zeldin saw approximately 110 constituents throughout the day.

“The congressman has always been in favor of engaging with constituents in any substantive, productive setting,” said DiSiena, but declined to address whether or not a town hall meeting would be held.

“Many of the people at the moment requesting town halls across the country are doing so with the purpose of disrupting the town hall,” DiSiena told the Advance last month, citing the productivity of smaller group meetings.

DiSiena added that the congressman will continue to hold mobile office hours on a monthly basis “for the next few months,” to ensure he reaches every constituent who requests a meeting. “Our next mobile office hours will be in April and the details will be announced soon,” DiSiena said.