Zadroga Act: Lawmakers include $8.1B measure to renew program 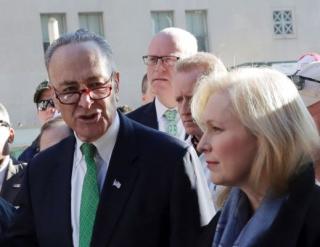 In a major victory for ailing first responders, congressional negotiators included an $8.1 billion measure to renew the Zadroga 9/11 Health and Compensation Act in the $1.1 trillion omnibus spending package that was finalized and released Tuesday night, lawmakers said.

The measure would extend the World Trade Center Health Program for 75 years with $3.5 billion in funding to monitor and care for 73,000 responders and survivors. It also would provide $4.6 billion for the Victim’s Compensation Fund, which it renewed for another five years.

Now it’s all over except for the voting, which the House and Senate are expected to do later this week before they leave Washington for the scheduled start of the holiday recess.

Sen. Kirsten Gillibrand (D-N.Y.), the lead Senate sponsor, said, “This agreement is incredible news for our 9/11 heroes and their families, and it is a testament to the extraordinary power that Americans can have when they raise their voice and demand action.”

Rep. Peter King (R-Seaford), the lead Republican sponsor, said, “Advancing the Zadroga bill was a long hard fight for the brave cops, firefighters and construction workers who put their lives and health on the line at Ground Zero. They deserve the very best medical care and treatment.”

Benjamin Chevat, executive director of the Citizens for Extension of the James Zadroga Act, also praised the responders for effectively making the case for the renewal in more than 20 trips to Washington to meet with lawmakers.

“This is a huge accomplishment, getting from this Congress, a health care program extended for 75 years and extending the . . . [victim’s fund] for another five years and giving it adequate funding to make people whole,” he said.

Once Congress approves the omnibus spending bill, the renewal of the Zadroga Act’s two programs will provide certainty and stability for the firefighters, police, construction workers and others worried about losing medical care and compensation.

The measure will renew until 2090 the health program, which technically expired Oct. 1 though it has the money to keep operating into next year, Chevat said. And it will keep the victims’ compensation fund, set to expire Oct. 1, 2016, open until 2021 with adequate funding.

Chevat said Republicans required revisions in both programs, which he described as relatively minor.

Eleventh-hour negotiations twisted and turned on the mammoth deal pairing the $1.1 trillion spending legislation with a giant tax bill catering to any number of special interests.

The deal, Congress’ last major piece of unfinished business for the year, became the vehicle for countless long-sought priorities and odds and ends, including bankruptcy protection for Puerto Rico, reform of visa-free travel to the United States and renewable energy tax credits.

Republican leaders predicted the legislation would come to a vote Thursday.

First they would have to pass yet another short-term government funding extension, since the current one runs out Wednesday at midnight.

“At the end of the day, we’re going to get this done,” new House Speaker Paul Ryan (R-Wis.) said Tuesday.

Last-stage negotiations focused on horse-trading around Democratic demands in exchange for lifting the 40-year-old ban on exporting crude oil, a Republican goal.

The final package was expected to ignore conservative demands for language clamping down on Syrian refugees entering the United States.

Instead it would contain changes tightening up the “visa waiver” program that allows visa-free travel to the U.S. for citizens of 38 countries, including France and Belgium, where many of last month’s Paris attackers were from.