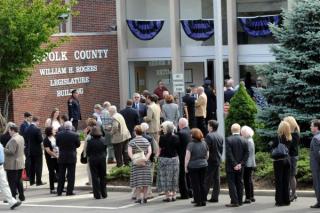 He had worked for years on construction sites as an electrician and later as a union official, but Sunday's wake for William J. Lindsay was held at his last work site, the squat brick Hauppauge building where for 12 years he presided over the Suffolk County Legislature.

"He had an uncanny, innate ability to cut through the nonsense of politics to what really mattered," County Executive Steve Bellone said of Lindsay, who died last week at 67.

A who's who of Suffolk County politics joined with private residents and inched along in the afternoon sun in a line that stretched at one point from a nearby parking lot to the auditorium doors. Mourners included Majority Leader DuWayne Gregory, former state Sen. Brian Foley and former Deputy Presiding Officer Vivian Viloria-Fisher.

Also among those at the wake were Legis. Tom Muratore, with whom Lindsay sometimes grappled, and former Legis. Brian Beedenbender, whom Lindsay mentored over beer and hot wings at Kansas City Roadhouse in Medford.
"Years ago, the legislature had a reputation for being disunited, the Wild West of politics," said Wayne Horsley, the body's deputy presiding officer. "He was able to corral that energy and keep us doing the people's business."

Signature legislative achievements during Lindsay's tenure that many pointed to tended toward the granular: crib laws, restrictions on harmful chemicals, truth in pricing and red-light cameras. The connecting thread, said people, was his sensitivity to rights and well-being of a figure they referred to, in separate interviews, as "the little guy."

Lindsay's own background had something to do with this, Bill Faulk, a Brookhaven planning official and former aide to then-county executive Robert Gaffney, said. "A blue-collar guy who pulls wire for a living is going to have a different perspective than some guy with a law degree from an Ivy League school."

Gregory Blass, former commissioner of the county's Department of Social Services, spoke of Lindsay's "remarkable attention to the little guy . . . people with nowhere else to turn." Blass said he'd marveled at Lindsay's aplomb for governing in a time of diminished resources and competing demands. "He made it look easy."

Once, before he knew he had the cancer that would eventually kill him, Viloria-Fisher recalled, Lindsay told her how tired he felt. She had another memory of him though, working in the legislative chamber. "He'd speak softly and listen, not even react for a while, just listen and take it in, and then he'd say 'Youse can do what you want to do, but this is what I have to do.' "