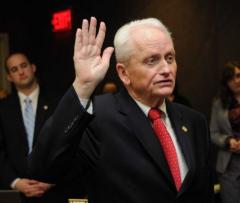 William J. Lindsay, the longtime presiding officer of the Suffolk County Legislature who was considered a unifying force during tumultuous years of fiscal crises and battles with the county executive, died Wednesday of cancer. He was 67.

His former colleagues learned that he had died at Stony Brook University Hospital as the legislature's government operations committee convened at 12:30 p.m. Lawmakers, some in tears, bowed their heads silently in prayer before postponing the day's proceedings.

Lindsay, a Holbrook Democrat, was diagnosed with meso-thelioma, a rare form of lung cancer, in early 2012 -- just as he was beginning his final two years in office due to term limits. He underwent surgeries, chemotherapy and other treatments, but was present for many key votes. In January, he was unanimously chosen as presiding officer for a record eighth straight one-year term.

"He's a peacemaker. He just knew how to talk to everybody," said Legis. Kate Browning (WF-Shirley), who served with Lindsay beginning in 2006, his first year as the 18-member legislature's leader.

Browning noted that Lindsay, a former electrician and International Brotherhood of Electrical Workers business manager, died on the anniversary of the terrorist attacks on Sept. 11, 2001. After his 2001 election, Lindsay advocated for health care benefits for the many county residents who fell ill after working at the World Trade Center site.

"His leadership, even as he dealt with his illness, was remarkable," said County Executive Steve Bellone, a Democrat who took office last year.

Much of 2012 and 2013 has been marked by debate over Suffolk's budget deficit, estimated at various times as being between $180 million and $530 million. Bellone proposed unpopular measures such as closing the county nursing home and laying off hundreds of county workers, fracturing lawmaker coalitions that Lindsay had kept together.

"I can only imagine how much smoother things might have gone had he not been dealing with his illness," Bellone said in an interview. "In that sense, he's irreplaceable."

Suffolk Democratic chairman Richard Schaffer, who recruited Lindsay for the county's 8th Legislative District seat 12 years ago, said Lindsay "could hobnob with the rich and famous and then be in the union hall with a pair of blue jeans, rallying the troops about a project. Very few people can do that."

Lindsay was born on Nov. 24, 1945, and was raised in Glen Cove. He became an electrician's apprentice at 14 and worked for years on construction sites. In an interview early this year he said his prolonged exposure to asbestos may have given him the mesothelioma. "You try to protect your members from this disease, and then you end up getting the damn disease," he said.

Much of Lindsay's stint as presiding officer, which began in 2006, was a delicate balancing act. Former County Executive Steve Levy, a Democrat-turned-Republican, often fought with the legislature, vetoing spending bills and assailing its leadership in the face of a fiscal crisis.

Lindsay recalled that Levy's hard-line approach caused him to try to unite the legislature, which once was known for partisan infighting. Levy could not be reached for comment Wednesday.

"He suffered mightily," Legislative Minority Leader John M. Kennedy Jr. (R-Nesconset) said of Lindsay's last months. "But like everything he did in life, he tried to go through it with dignity."

Lindsay is survived by his wife of 43 years, Patricia; three children, Kathleen, Denise and William Lindsay III, a Democrat who is running this fall to claim his father's legislative seat; and four grandchildren.