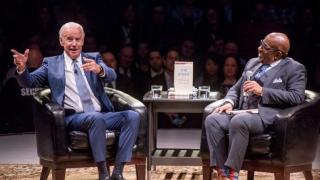 Former Vice President Joe Biden recalled the loss of his son Beau and his family’s subsequent struggle to grieve during an hourlong talk at the NYCB Theatre at Westbury Monday night, where he also reflected on the current political climate.

Biden, seated with “Today” anchor Al Roker on the theater in the round’s iconic rotating stage, is on a 19-city book tour promoting “Promise Me, Dad: A Year of Hope, Hardship, and Purpose.” The book recounts, in part, when Biden lost his 46-year-old son, Beau, to brain cancer.

The book’s title, Biden said, reflected a request from his son to forge ahead after his death on May 30, 2015. It was not, the former U.S. Senator from Delaware said, a deathbed plea to run for president, as some have speculated.

“Promise me you’ll be ok,” the former vice president said, recalling his son’s words. “Give me your word as a Biden you’ll be OK.”

Biden, who has dubbed it “The American Promise” tour, told the audience that dealing with the loss of a loved one eventually becomes easier.

“The memory will bring a smile to your lips before it brings a tear to your eye.,” he said.

The crowd interrupted Biden throughout the chat, pleading with him to run for president in 2020. “If not you, then who?“ said one.

Regarding his future political ambitions, Biden said: “If the lord almighty came down right this moment, I gave him my word as a Biden, and said the nomination is yours, but you have to take it right now, I would say no.”

He explained that “those of you who have been through the kind of things I write about know that it takes time.”

His family is “jelling again,” and he vowed to continue his activism and work on behalf of Democratic causes but stopped short of completely ruling out another White House run.

“I’m going to work like the devil to see if we can elect a Democratic Congress,” Biden said. “Not a joke, we’ll have a family meeting in the fall, and we’ll see.”

Biden said that while he wanted to honor the tradition of U.S. presidents and vice presidents not speaking out against their successors, the emergence of white supremacists and Nazi sympathizers in Charlottesville, Virginia — and President Donald Trump’s comparison of violence at the August rally on “many sides” — led him to speak out.

Biden said he could not fathom that “in 2017, a group of lowlife people would come out of the fields in darkness carrying torches and chanting and saying the same anti-Semitic vile . . . that occurred in the 30s in Germany . . . and then to have their actions to be compared to those who were in fact taking them on, I found that to be reprehensible.”