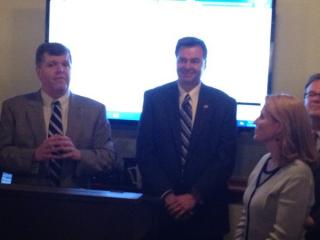 And supporters from across the county, student political observers — even Sean Walter at one point after his defeat — showed up to a banquet room at the Dark Horse Restaurant in downtown Riverhead to congratulate Krupski.

“You stomped me bad,” Walter told Krupski, coming from Cody's BBQ and Grill, a few doors down – to shake the victor's hand. “I intend to stay in Riverhead, apparently — I appreciate the message. I wish you the best of luck, my friend, God bless.”

Watch a short video of Krupski's victory moment attached to this post.

Riverhead resident Greg Fischer, who ran for Riverhead Town Supervisor in 2011, said that this election was the cleanest he’s ever seen.

“Krupski is unusual in that he didn’t pull any punches and stayed on point — it’s usually always so negative,” he said. “And he’s completely bipartisan, which is great. Partisanship is a big reason for deadlock.”

County Democrat Chairman Rich Schaffer said that he’s never seen members of the committee so energized and dedicated to supporting Krupski during this short campaign.

“I’m speechless over these numbers — this is a result of the incredible teamwork on this campaign,” he said.

Dan Hilton, an electrician from Wading River, said that he was excited to have “one of our own” representing the district in the county.

“This is a working-class guy, just like us,” he said. “And now we have a voice.”

But not everyone in the audience had such a personal connection to the election. Bryan Carroll, a student of public policy at Stony Brook University, came to Dark Horse Tuesday night to observe the end of what he said he saw as a very unique race.

“This election was very interesting for two reasons: first, the incumbent left, which is a challenge in itself to find the right person to fill that seat,” he said. “And Republican or Democrat, either candidate will create a new slate. It just goes to show you what knocking on doors means, how powerful it can be. As Tip O’Neill said — all politics is local.”