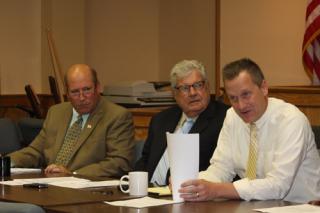 It depends on who you ask.

Councilwoman Jodi Giglio took a shot at Town Supervisor Sean Walter during a WRIV 1390 radio interview last Wednesday, claiming her supervisor primary opponent told town department heads that he would be going door-to-door campaigning beginning at noon every day until the primary.

When asked about the comments by a News-Review reporter, Mr. Walter denied making those exact remarks, but stopped short of saying he wouldn’t be knocking on doors during business hours.

“You can’t run an election by sitting behind your desk,” Mr. Walter said. “In the last four weeks, I’ve knocked on 600 doors and gotten about 300 signatures.

Mr. Walter clarified his remarks to department heads by saying that because of “elections and schedules, if they need something, they need to alert me so I have time to respond to whatever they need.

“Campaigning is all the time,” he said. “There is no set campaign schedule.”

Ms. Giglio, who acknowledged that she wasn’t at the mid-June meeting where Mr. Walter allegedly made his comments, said she believes the supervisor should be present in Town Hall when it is open.

Ms. Giglio said she usually campaigns after 4:30 p.m. or on weekends, even though her council post is considered part-time.

Mr. Walter, who said he doesn’t have set hours and often works on Saturdays, added that he often gets valuable information by knocking on people’s doors during campaign season.

“For me to go out and knock on people’s doors, that’s as much a part of the supervisor’s job as sitting behind this desk,” he said. “That’s the way you learn what people want.”

He said a new stop sign is coming to Calverton because of feedback he received on the campaign trail.

Mr. Walter is challenging Ms. Giglio in a primary for his position after Republicans nominated her instead. Anthony Coates is the Democratic candidate, while Mr. Walter will have the Conservative line and Ms. Giglio the Independence line, assuring that all three will be on the November ballot regardless of the primary results.