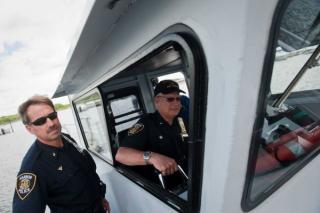 The union representing most Town of Islip employees is questioning the decision to lay off security personnel and harbor police, saying the moves conflict with the town's recent efforts to beef up security at Town Hall and maintain safe waters.

The town board last month approved the layoffs of 35 town employees -- including three security guards and four members of the harbor police -- as it moves to close a $12 million budget deficit. The board also raised property taxes 28 percent.

But officials from the United Public Service Employees Union, which represents about 370 Islip Town workers, said losing the security guards would leave the town without staffing for a newly installed security post at Town Hall.

"The town was emphatic that there needed to be security at the town's main office building to ensure the safety of town leaders, staff, town residents and taxpayers who visit the building for town services," said Patrick E. Boyle Jr., union president. "Is the town's message with these layoffs that this was four weeks ago, and we're really not concerned with their safety?"

Town Supervisor Tom Croci said he'd prefer to avoid layoffs, but they are part of the town's fiscal reality. Croci said the addition of the guard post at Town Hall was a "security enhancement" that will remain. He declined to comment on specific security measures but said any further changes will merit "appropriate public notice."

"Our job is to not only look out for our employees but the taxpayers as well," said Croci, a Republican. "We're balancing the safety needs of our town in acknowledgment that there are state and local partners that play a role in the town as well."

Union officials also challenged the decision to leave the area's waterways without a town security presence. The layoffs of three bay constables and one supervisor would effectively disband the unit.

Patrick Passaretti, the union's labor relations representative, said relying solely on Suffolk Police and the Coast Guard would leave the public "in danger. . . . Their boats break down; there's no one to rescue them," he said.